You can break this trail into two shorter segments by stopping for the night at Viens or before (and you REALLY should).

The natural ochre pigments of the Luberon have been used since prehistoric times: we can see evidence of that in cave art. In 1780, locals discovered that, after processing, ochre became an inalterable and non-toxic dye, and in the 19th century the exploitation of the mineral deposits became industrial. Development of synthetic dyes in the 1930's effectively ended the mining and the open-air quarries became merely a geologic oddity and attraction.

After a few road and path kilometers quickly pass between vines and cherry trees, you enter the ochre massif and its unusual shimmering colors that look like a chunk of Bryce National Park somehow dropped in. The earthy and sandy singletracks of La Bruyère massif contrast with the hardness of the usual limestone strata of Provence. The ochres soon give way to rocky paths that join Rustrel. You ride along The Provençal Colorado to climb a series of forest trails that lead to the ridge of the Pierroux traverse. This beautiful singletrack, with its admirable panorama of the Lure mountain, takes you to the lovely village of Viens and its ramparts.

Shortly after leaving Viens, a sidehill trail that descends into the valley will quickly awaken your instincts as a mountain biker! The route takes you to the edge of the Calavon, then you disembark at Céreste through a tunnel of the old abandoned railway. Continue this incursion into the Alpes-de-Haute-Provence via the crest of Montjustin and its village. Then climb into the massive, undulating shapes of the Grand Luberon and go west to Vitrolles-en-Luberon, nestled on the southern foothills.

NOTE: the kind folks at the French Cycling Federation who mapped this route must have used a motorcycle. You'd be crazy to try to do days this long. 30k is more than enough. 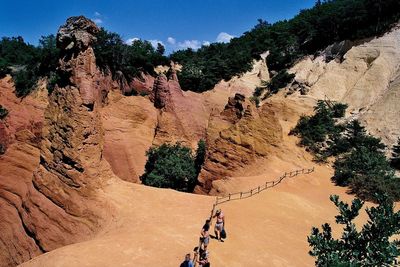 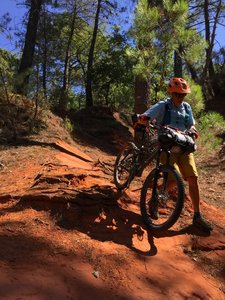 Sep 12, 2019
F Felix
We tacked "St.-Saturnin-Les-Apt (SSA) to Rustrel", onto "Mur-SSA. Grueling day. You should be looking for ways to make these days shorter, not longer.