“Nice loop with a mix of everything. ”

Majority of this trail is unrideable during the rainy/monsoon season.

Great viewpoints of the Pacific Ocean overlooking the west side of the island. Nice, fun whoop-dee-doo sections toward Leo Palace. Most of the off-road sections are shared with off-road vehicles.

Park and start at the bottom of Turner Road just off Rte. 6 in Piti/Nimitz Hill. The paved climb begins for a couple miles. Turn left up a rocky slope (look for a big water tank at the top of the climb) and then make a right into the red dirt section. This starts some of the fun and somewhat technical sections as you drop into a dirt bowl and then descend at a nice pace until about the four-mile mark. Veer right and take the trail around the base of Big Mountain.

Climb to the top of Big Mountain where the incredible views of the western side of the island and the Pacific Ocean can be seen. The descent down Big Mountain can be daunting and the lines change often because of the frequent off-road vehicles that share the trails. Walk this if you're not comfortable. There are several options after the descent but follow the GPS track and MTB Project mobile app down Snot Hill which will wind around towards the Plateau. Slow down, as there is a quick snapback turn into a Jeep trail that reverses direction. This often times is overgrown so you'll have to be on the lookout for remnants of doubletrack.

This leads to a favorite section called Rock Garden - not because it's technical and potentially hazardous, but because the singletrack is literally outlined with small to medium-sized rocks. Follow this around and then up to the Plateau where the trails then drops into the scary Baby Heads descent.

The trail continues on a combination of singletrack and Jeep trail descents until about the 5.5-mile mark where you start to climb the Goat Trail. Crest this and now you're into the Leo Palace red dirt trails. Lots of fun whoop-dee-doo sections but nothing too technical and crazy. You'll make your way to Tank Farm (there are only two WWII tanks left) before starting to make your way closer to the Leo Palace hotel. Still lots of red dirt Jeep trails to go.

At about the 10-mile mark you'll begin a nice, fast Jeep trail descent. Careful here, as this tends to be overgrown with tall grass so you're almost riding some of the trail blind. Make your way out onto the paved road where you'll take a left down the very fast road. Watch out for cars. You'll start to climb out and then come to a three-way intersection. When safe, cross and make a left and follow the road all the way around to the Charlie Corn Road.

The trail starts a small climb on rough coral road before making the next right into doubletrack with lots of jungle around. This can be very muddy at times so be wary. You'll come to a fork - take it left and follow the very obvious Jeep trail again until right around mile 15 where you'll pop out onto some pavement. Take a right there and then another right followed by a left where the road takes a steeper pitch. Climb for 100 yards or so and then you'll be at the top of the Pipeline Road. Take that left and follow it for a mile and then take a right for about half mile and then another right. You're almost done.

Now you're on the Power Line Trail (named because of the power lines that line up the trail) and you'll drop into a nice, fast, grassy descent. There is a small stream crossing at the bottom. There is a bridge that used to be rideable, but not likely anymore. Cross this carefully and then make your way up towards the red dirt flat. Look up and follow the power lines and you'll see your last climb awaits - the Grass Wall. At the top of the climb, follow the road (Rte. 6 / Spruance Drive) left and head back to where you started.

With the exception of the long paved road climb (and descent) from Port Authority Beach, this is the bike course used in the XTERRA Guam Championship race. 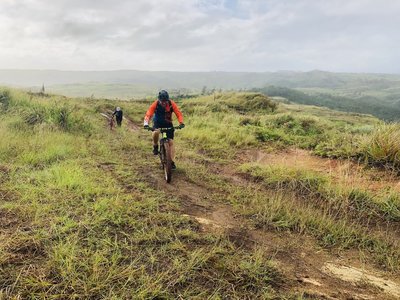 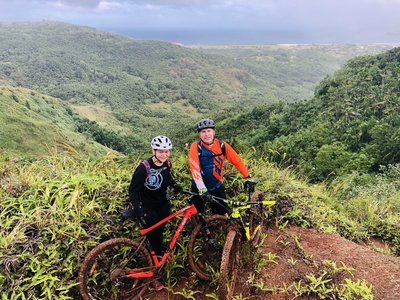 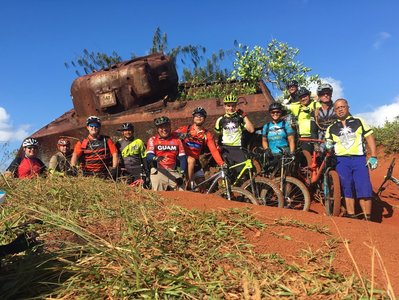 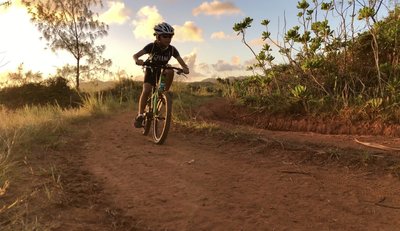 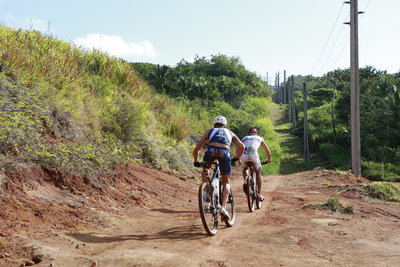 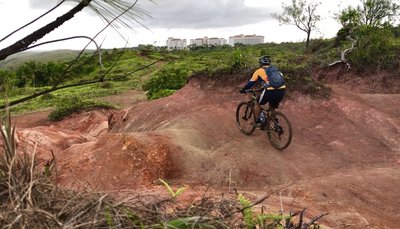