“Some great technical singletrack through the jungle with tons of, often wet, roots. Don't feed the monkeys. ”

Chestnut is a purpose-built mountain biking park in the central green lung on the main island of Singapore. A well-marked network of mountain bike only trails offers something for all levels of rider.

This loop strings together all the trails in the network, generally in order of increasing difficulty. There are few mountain biking trails in Singapore, so you'll find this is a popular place on weekends. Expect to see a lot of other riders.

This is a nice introduction to tropical riding (hot, steamy, and often wet). The wetness makes the roots much more challenging, and it will likely leave you and the bike covered in mud, so you'll appreciate the bike wash at the trailhead.

The trailhead starts at the mountain bike car park where there is a small bike shop that rents bikes. It is a hub of activity, and the bike wash is especially popular.

This ride starts with the older Chestnut South south trail. Chestnut South will acquaint you with the kind of riding you can expect: lots of roots, big and small, often tangled into large networks, and usually wet. The roots will keep you on your feet as you try to stay on your pedals. Assuming it has rained recently, you can also expect some soupy, muddy areas so expect to get dirty.

After Chestnut South, head north on Tender Foot for a short distance before taking the second entrance for Little Wings. Little Wings is your first taste of the more advanced riding you can expect later. If you've enjoyed Little Wings, you won't have any issues with the other trails in the park. (The first entrance, Little Wings Alternate, features an even more advanced rock drop. If this is your sort of thing, you're likely to be bored here, but there also aren't many other options).

Either way, Little Wings dumps you onto Cubs which continues into Blue Quail. Cubs is the only major trail in the park that is two ways, so watch for oncoming traffic. It's pretty smooth until you get to Blue Quail, and then you can expect more roots.

At the end of Blue Quail you come to the Bangit hut (no services - only shade), where you'll probably encounter a few people taking a break on the weekend. From Bangit hut, head out on the wide Central Catchment Park Connector until you see the sign from Slider. Don't confuse it with the sign for the live firing area. Central Catchment Park Connector actually continues all the way to Mandai Road and is a good way to add some easy (but still dirt) mileage to the ride.

Slider is characterized by sweeping turns through the jungle with lots of root obstacles.It's gently downhill most of the way, ending back at the Bangit shelter.

Now it's time to complete a loop on all the advanced level trails. From Bangit, head out on the blue Pango trail until you get to the final access to Black Crawler. Black Crawler is the most difficult trail at Chestnut Mountain Bike Park; narrow with lots of roots and a few rock gardens. Look for the advanced feature marked as "The Wall," or you can take the chicken line around it.

If Black Crawler proves too much, there are lots of bail points that take you to blue trails. After Black Crawler, you merge with Blue Quail again for a short distance. Take Side Step and then continue onto Grasshopper. Grasshopper has some nice bermed turns. Grasshopper dumps you out at the Bangit shelter again.

You can continue to play on the more advanced trails in this area. When you are done, head out on Pango again and take it and Cubs back to the trailhead, keeping in mind that this is a two-way trail. 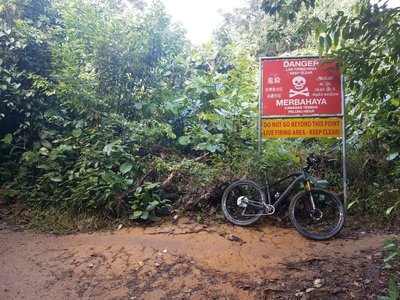 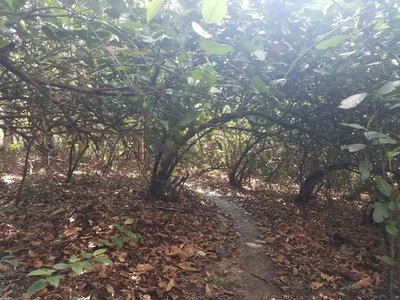