The Schluchsee is a picturesque lake in the Hochschwarzwald (High Black Forest). This featured ride takes advantage of the large network of dirt and gravel forest roads in the Schwarzwald to visit 3 lakes ("Seen") while weaving around and over the 1200-1500 m (4,000-5,000 ft) mountains ("Bergen") in the area. This is the highest area in Germany save the Alps along the southern border and the area is covered in a dense, dark forest.

You won't find much singletrack along the way though because the Schwarzwald lies in the state of Baden-Württemberg which has the so-called 2 meter rule meaning that most paths under 2 m wide are off limits to bikes.

This ride starts at the train station in Schluchsee village. In general, the trains in Germany are very bike friendly. Most regional trains (IRE, RE, RB, S-bahn) have special cars or areas for bikes - look for the large bike symbol painted on the outside of the car. You'll need a separate ticket for the bike which should be about 5 Euro. Prohibitions may be in place during rush hour in/near major cities however. Some Intercity Express (ICE) trains also allow bikes, but you'll definitely need a reservation and separate ticket.

You'll need to download the GPX or bring your device with the MTB Project mobile app unless you want to get lost on one of the many intersecting forest roads along the route.

The ride begins in Schluchsee village following the Schluchsee Radweg bike path west approximately along the shore of the lake. The bike path merges with the main roads for a short distance until you reach the far end of the lake where you should take the Seeweg which follows the lake shore. Just after a bridge over the Ahabach stream tributary, turn right onto Kirchweg Aha which is the start of a 360 m (1,200 ft) climb.

The climb follows Lachenweg for a short distance and then continues straight onto Rümmelehofweg. This is a nicer flat section which may be welcome after the 150 m (500 ft) climb that you've just completed. Rümmelehofweg ends at the main road - turn left for a short distance and then right onto the Silberfelsenweg forest road to resume the climb. You can take Silberfelsenweg to its end where it meets Zweiseenblickweg, but the Kapellenkopfweg is a nice detour that gives you a lake view and ends up at the same point.

Zweiseenblickweg (Two Sees View Way) leads to a rocky outcrop overlook where you can indeed see two lakes: the Schluchsee and the Titisee. This is supposedly one of the best viewpoints in the Schwarzwald (Black Forest). The only bit of technical singletrack along the whole route is just before the overlook. The overlook also represents the end of the first big climb, so take some time to enjoy it.

After the overlook, the route descends slightly but steeply along Lachenhütteweg. The forest canopy breaks here and there are long-range views towards the Herzogenhorn peak which is the object of the next climb. Lachenhütteweg takes you to the outskirts of the village of Feldberg and after following some roads through the village, the Dr Freddy Stober Straße and Herzogenhorn Summit take you another 150 m (500 ft) to the summit. The Herzogenhorn (1415 m; 4,642 ft) is one of the highest peaks in the Schwarzwald (Black Forest); the two higher peaks being just to the north. This is the highest area in Germany outside the Alps, so you can expect a good view of the Schwarzwald on a clear day.

Backtrack along Herzogenhorn Summit but instead of Dr Freddy Stober Straße, take Graffenmatt down to the base of the lift. Graffenmatt is quite steep, using a more direct descent, and includes some singletrack sections as you return to Feldberg village.

In Feldberg, more village roads take you to the other side of the ski area to the Ernst Maurer Weg. This begins the long descent to the Feldsee (lake) which continues on Seesträßle. Seesträßle takes you to the beautiful Feldsee. There are rocky cliffs and small waterfalls on the far side of the lake. Directly behind the Feldsee is the Feldberg (mountain), which at 1493 m (4,898 ft) is the highest point in the Schwarzwald.

The descent continues through an area of heavy forest along Mühlkanalweg. A stretch of local paved road passes you through Bärental to another lake, the Windgfällweiher. The Windgfällweiher is at about the same elevation as the Schluchsee, so the climbing and descending is finished and you have only a pleasant stretch along Oberer Bildsteinweg and Schluchsee Radweg to take you back to Schluchsee village.

Schluchsee village caters to the many tourists who visit area to enjoy the lake activities and the natural areas in the Black Forest. The lake is popular for swimming in the summer, or you can take a cruise on the lake to finish out the day. 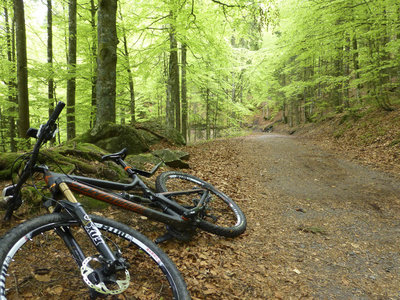 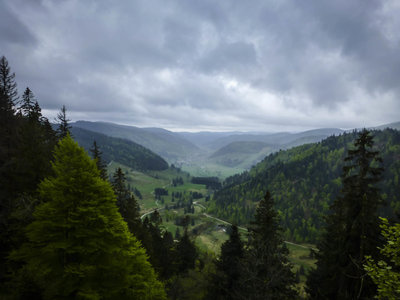 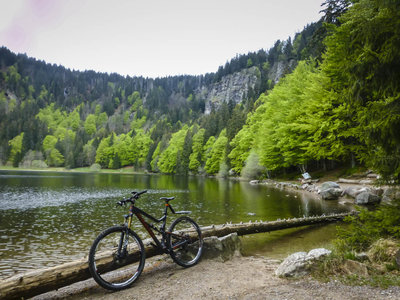 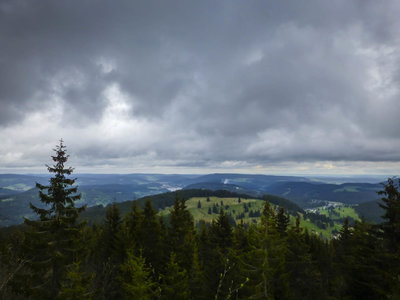