“A lollipop route with a technical descent and climb among the cloud forest. ” This is an incredible loop with a technical, singletrack descent through a beautiful foggy forest landscape. Be careful on the obstacles and with your speed, in addition to some parts where there are often landslides. As for the climb, that part can also be done in reverse. It is a sustained climb and not so hard. It only gets hard when it rains, and there is a lot of mud.

Be careful through the narrow sections. Better to ride in group. Watch out for fallen trees.

Take the Mosquera - La Mesa route, then the detour to Laguna la Herrera, before the Mondoñedo climb.

At this point, the smell is very strong because of the factories and pollution. Here you follow the path, until a detour where you take a left. You'll arrive at a house where the technical, singletrack descent begins on Avenida Principal Access. There are parts that can not be ridden, because of the narrow trail or the obstacles, such as trunks of trees and cracks in the trail that have been washed out from a small stream as it descends.

This trail connects with the road to La Mesa right at the Curubital restaurant, hence the name of this route. You must close the gate again at the fence, but there is no problem going through here.

You have to go down just a little along the paved road to a wooden fence, where the cyclades are passed on top, and the Santa Librada Trail ascent begins along a path. You'll have to open another fenced gate later and put it back, and continue with a sustained climb through the cloud forest.

Then you come to another gate that can be opened—it must be closed again—and another trail is reached at the point where this ride originally turned to the left. From here, return along the same road towards Laguna La Herrera and via La Mesa - Mosquera.

Possibly a more popular road back in the day that was used to reach the area of ​​Tena - La Gran Vía. 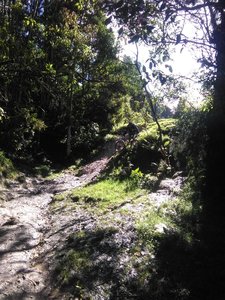