“A great ride that will allow you to see the unique sights of southern Armenia. ”

Ucom and VivaCell-MTS networks are almost always available between the cities of Sisian and Goris. In case of emergency, call 911, a service which is available throughout Armenia.

A long ride filled with marvelous sights of southern Armenia. Enjoy pedaling as you're surrounded by a centuries-old culture, old bridges, churches, castles, and geological landmarks. You'll spend about half of the time on doubletrack and half of the time on paved roads on this full day ride.

This ride begins in Sisian city and travels east for five kilometers to reach the village of Aghitu. You'll have the opportunity to check out the sixth century Tomb of Aghitu. From there, the road leads to the villages of Vaghatin and Vorotnavank (from the year 1000), then to the Vorotan hot springs, where you can take a break to enjoy a swim across from the fifth century Vorotnavank ruins.

Afterwards, the Melik Tang Bridge will bring you to the Shamb Reservoir which is shaped like a gentle flower petal. Continue above the southern shore past peaceful fields and orchards. At the southern end of the reservoir, the grade begins to switchback and climb through the village of Ltsen.

Riders will soon reach the Ltsen to Tatev Country Road where it turns away from the Vorotan Gorge and keeps climbing into the slopes above. In addition to lovely forested and open views, you'll see the unique Hin Harjis, an uninhabited village, the houses remaining with their thatched roofs and uncultivated gardens.

At about 20 kilometers, the ride's high-point is reached and there's a mostly uninterrupted descent down to the village of Tatev. Make sure to head to the south edge of Tatev to reach the rock-cut Tatev Monastery. This fourth century building is quite picturesque and well worth the detour!

Tatev is a good place for an overnight stay, rest break, or to replenish your snacks before heading north. Several kilometers of steeper climbing bring riders to the village of Halidzor. There are some more sections of tiered climbing after this, but they are more gradual and even have a few brief descents as you pass through Shinuhayr and eventually take the main road to the ride's end in the town of Goris. 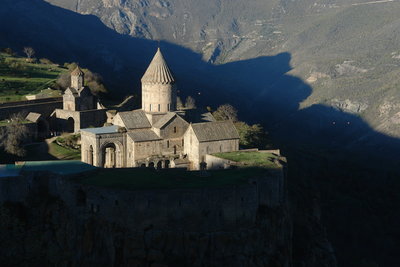 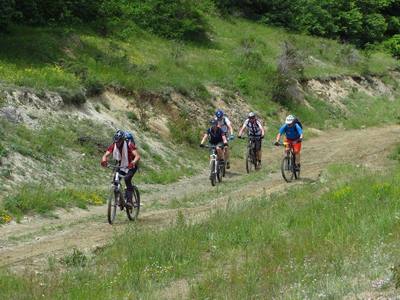