“A point-to-point route from the most popular tourist center in Sevanavank located on the Sevan peninsula. ”

Ucom and VivaCell-MTS networks are available near the residents, but connection may be lost in Areguni mountains and ‘Dilijan’ National Park. In case of emergency, call to 911 service available throughout Armenia. Beware of dogs guarding flocks of sheep.

The ride begins from Sevanavank, in Gegharkunik province of Armenia. Lake Sevan is one of the most popular resorts for Armenians. In summer, the water temperature reaches 21 degrees Celsius, so you can swim in the Lake. The Vaskenian Theological Seminary of Sevan was established in 1990 on the east side of the peninsula.

After exploring the city, you'll ride by the only paved road and will reach Tsovagyugh village near the Lake Sevan. Then, by the car road, you'll ride up (due to the marked trail) to Areguni mountain range by gravel trails.

At an altitude of 2,450m the road begins to descend sharply towards Tavush province. The biking trail passes through ‘Dilijan’ National Park. You'll probably be asked to stop there and register, as this is a state park. Rideing downwards through woods, you'll get to the village Khachardzan, and then ride 3.0 km more till you reach village Aghavnavank.

Afterwards, the trails leads you to the picturesque church of Aghavnavank surrounded by rare tree species. Aghavnavank church and the Yew Grove with its mysterious landscape are located in ‘Dilijan’ National Park. Thereby, the biking trail from Sevanavank (Gegharkunik province) to Aghavnavank (Tavush province) ends. 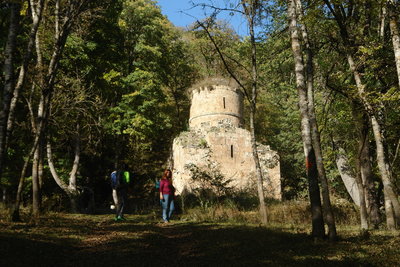 Shenavan, Not set (Republic of Armenia)