There's a reason this trail has been named one of the best singletracks in the UK. It pairs spectacular scenery with awesome technical singletrack as it crosses from the south to the north of the Isle of Skye. It's described from south to north as part of the Glen Sligachan Circuit, but it can also be done as an out-and-back. It's all singletrack with some fun rocky sections but there can be a few boggy areas, although not as many as some of the other trails in the area.

It starts essentially at sea level near the Camasunary Lodge. The beautiful Cuillin Mountains lie to the west as you travel towards Glen Sligachan. The first mile climbs gently to Loch na Creitheach and then the trail follows the western shore of this remote lake. This takes you into a quiet valley in the interior of the Isle of Skye. A creek runs from the hills to the east and it spreads out into multiple branches in the valley leaving some boggy crossings. This takes you to the shore of another small lochan at about three miles before you start climbing over a pass where there are a few more lochans.

The climb is a gentle grade but there are some more technical rock features to keep the climb interesting. You'll reach the high point (308 ft) around the four-mile mark and then you've got a look down the River Sligachan valley. The descent features rocks of all manner: big, small, loose, embedded, gravelly... overall quite a fun ride with some technical sections but intermediate riders should be able to ride most of the way. Several waterfalls can be seen in the many small tributaries to the River Sligachan along the route.

The trail ends at the Hotel Sligachan after you cross an old stone bridge over the river. There is a major trailhead at the hotel, so expect to see a lot of hikers as you near the hotel. The hotel does have a good pub... a perfect ending for the perfect ride. 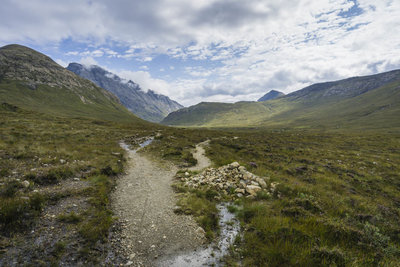 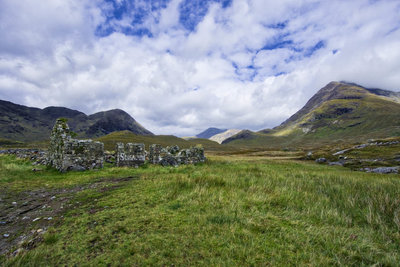 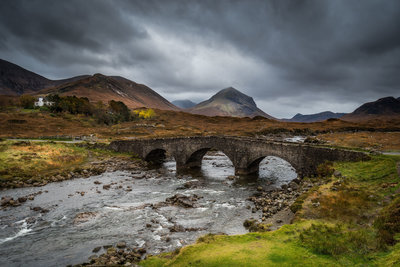