“Glentress' most difficult trail has big climbs and descents with advanced features that will challenge many riders. ”

Glentress is one of the 7 Stanes of Scotland which are well-developed mountain biking trail systems with facilities including bike rental, a small cafe, both bike and people showers, and a ropes course. There is a nominal fee for use of the facilities, including parking, so bring some coins.

The route is well marked so it isn't necessary to check MTB Project mobile app often. The trail format is a number of fun singletrack sections interspersed with short forest road sections. There are plenty of rock gardens, skinnies, and small jumps throughout to keep you busy. The trails are one-way and most of the tracks are under a the dense forest canopy.

The Glentress Black Route is the longest route at Glentress with the most advanced features and many/most people will find it challenging. For this reason, the Black Route sees significantly less traffic (after it leaves the section shared with The Glentress Red Route) and it has more of a backcountry feel.

From the lower car park, you'll climb most of the first 8.0 miles. The first 2.5 miles takes you mostly on singletrack up to the Buzzard's Nest car park and the Freeride park. This section features well used singletrack with a number of switchbacks. Many of the switchbacks offer both easy and more advanced, rocky lines. The trail network is very dense at this point and there are several trail intersections that would be confusing except that they are impeccably marked.

After the Buzzard's Nest, you'll climb a short distance on forest road before the first real segment of black singletrack (Soor Plooms). It's not too technically difficult but it's uphill. The singletrack ends at a forest road at 3.5 miles where you've got a good view of the Scottish Borders region. If you're in over your head, turn right at this point to go back to Buzzard's Nest.

The Black Route continues climbing to the left on the forest road until 4.3 miles overall. Then you've got your first taste of black singletrack descent on the Goat Track followed by the Tower. You'll find the black singletracks are much narrower and sometimes steeper, but generally pedalable. Some particularly advanced features have dedicated warning signs and these you may want to scout before taking the plunge if you've not ridden them before.

At the end of the Tower, you begin climbing again on the Kipps. The Kipps passes through a dense, lush pine forest over some loamy soil. The forest is so thick it was almost dark at midday (although to be fair, this is Scotland so it was cloudy). The Kipps seem to climb forever (really only about 1.5 miles but 700 feet up) through a series of probably about 800 switchbacks over more rocky terrain. This section of singletrack can be quite narrow and some of the switchbacks are quite tight and will demand good handling skills. Just before you reach the crest of this climb at 7.0 miles overall, there is a small hut in a clearing that affords an even better view of the Scottish Borders region.

From the hut, a short climb takes you to the Britney Spears descent with it's own switchbacks on loamy soil. After Britney Spears, the Mustard Snake takes you up a rocky single/doubletrack to the highest point in the ride, Dunslair Heights at 1,970 feet, where there is a communications mast but otherwise not much of a view.

From here you've got a fast, flowy 4.0 mile more technical singletrack descent through the forest. These segments are called Boundary Trail, Shane McGowan, Leithen Door, and Deliverance. They traverse more loamy soil through the thick forest and there are some epic root bundles and rock gardens to be negotiated as well as some drops and chutes. Again, any areas of particular difficulty have their own warning signs. Leithen Door might be the most difficult segment with a number of tight switchbacks and technical features.

After Deliverance, you've got Redemption Climb (another 600 feet up). And you thought you were done! A couple more big descents follow: Ewok Village, Double X, and the Bitch. These are similar in nature to the previous black singletrack descents. Then you merge with the red trail to get back to the car park and the trail becomes wider and easier. There are a number of log rides and northshore elements throughout, particularly on the way down after the merge with Red Route. As on the outbound section, there are some optional advanced lines after the merge with the Red Route.

If that wasn't long enough, there are a number of longer rides that can be put together in the surrounding countryside, but they won't have the density of technical features found in The Glentress Black Route. 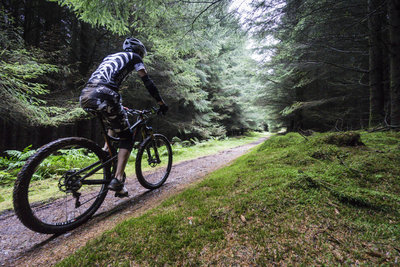 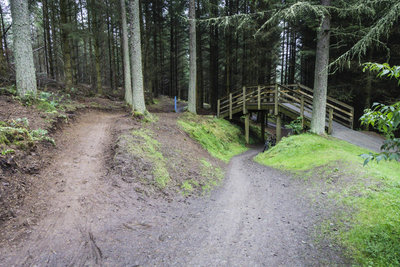 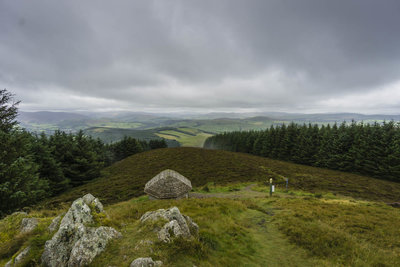 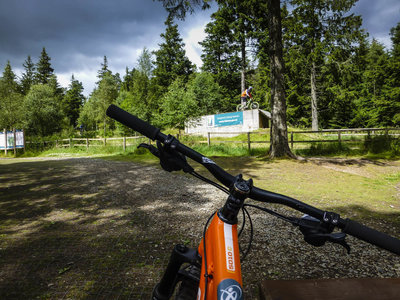 All Clear 46 days ago See History

Innerleithen Ramble Between the Stanes