“A challenging cross-country climb leads to towering views of the Cairngorms. ”

The Burma Road loop is a challenge for cross-country riders that climbs high above Aviemore with great views back towards the peaks in the Cairngorms National Park. At the top of the climb, there is an optional rocky singletrack that takes you to the top of the nearby Geal Charn Mor summit for true 360-degree views. After that you drop into a the remote, serene valley of the River Dunlain. Pedaling down the valley takes you to the historic Sluggan Bridge which was built in the 18th century as part of a network of roads to control the local population following the Jacobite rebellion. The final leg takes you through the High Burnside area west of Aviemore where some (optional) spectacular technical singletrack descents await.

The route takes its name from the main 3.35 mile, 1,400 foot climb which is at about 10% grade known as The Burma Road. Reputedly the road was built by prisoners of war in the 1940s. Whether or not that's true, it will challenge your stamina.

The trail starts in Aviemore city center where it follows the well marked Speyside Way: Aviemore to Kincraig Section south for about 2.0 miles. Here you'll reach an intersection near a farmhouse just after crossing a bridge over the Allt-na-Criche Creek. Turn right and proceed across a second bridge over the railway. Turn right on the B9052 road and then quickly left onto the A9 access road.

You'll have to turn right onto the busy A9 for about 0.1 miles before turning left onto Lynwilg Road. (Note that the negotiation of the A9 crossing may change in the near future as they are currently (2017) twinning this road for it's entire distance as it is the main north-south route through Scotland). Follow the paved Lynwilg road for about 0.5 miles, noting it turns right along the Allt-na-Criche creek.

At the end of the paved road (3.1 mile mark) veer right onto the gravel road just before a grouping of several houses and proceed through the gate. This begins the main Burma Road ascent. There's an "honesty box" with some excellent traybakes just past the gate, if you need to fuel up for the climb. Although initially forested, you quickly break out into open territory and as you climb increasingly higher the views of Cairngorms National Park to the east improve. You'll want to stop and take lots of breathers, err pictures, along the way to the top. Initially the road has a smooth gravel surface as it receives some farm traffic but it becomes increasingly rough with larger rocks as you near the top. It's never technically difficult though, just long and steep.

Three rock cairns mark the top of the climb at 2,300 feet, and the view from here is impressive (unless if happens to be foggy). If it is a clear day, consider it an omen that you should take the narrow rocky path to the summit of Geal Charn Mor (400 feet additional climbing over rocky singletrack) for a true 360-degree view.

The descent continues at a much more gradual rate. When you reach a house at the 10.0 mile mark, the trail surface switches to grass for a short distance before switching to crushed stone. This continues to track the river until 12.7 miles, when you should veer left onto a doubletrack. You could continue straight, but sometimes this section is boggy. The doubletrack is a bit rocky but not technical. It takes you to a small farm where it intersects with the NCR7: Sluggan Bridge Off-Road Section.

From here, most of the rest of the trail is through forest. Turn right and eventually you'll cross over the historic stone Sluggan bridge. Shortly after that you leave NCR7 onto General Wade's Military Road which veers to the right and begins climbing a small hill. Once you descend this hill, just before the main A9 highway, turn right onto a High Burnside Upper Forest Road. There is a network of trails and singletracks in the High Burnside area and they can be quite confusing (but also worth exploring), so the GPX, the MTB Project mobile app, or a local will be helpful. As you work your way towards Aviemore, this route follows a pair of the technical downhill singletracks (High Burnside Shortcut and Carn Avie) to reach the High Burnside Lower Forest Road which takes you to the Aviemore Orbital Trail and the city center.

Expect to see lots of sheep along the way and very few people. The summit can be exposed and windy, so mind the weather. 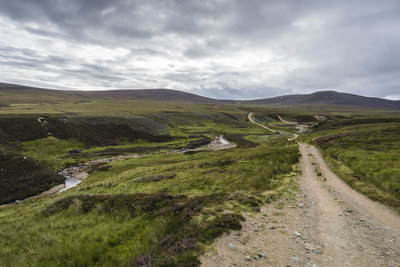 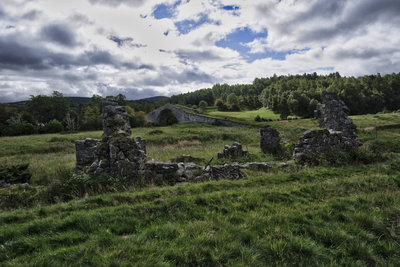 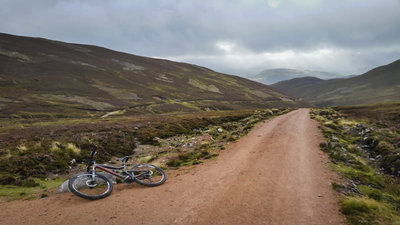