“A splendid way to spend a day on the bike through stunningly marvelous territory. ”

Fancy a long, challenging ride through some of the most magnificent territory in the highlands? This is a proper ride through amazing scenery with a couple of wee climbs that will leave you absolutely knackered at the end. The route follows the well-marked West Highland Way along historic military and parliamentary roads and includes some smashing, rocky singletrack sections. With careful planning, you can use Scotrail as your shuttle.

The ride begins with a traverse across the western reaches of the wild, isolated, and beautiful Rannoch Moor. Then you pass into Glen Coe before climbing the Devil's Staircase over the Glencoe Mountains. A fast and rocky descent takes you to Kinlochleven on Loch Leven. A second wee climb takes you to into the Mamore Mountains and another section of military road through a remote valley. From there, it's a peaceful ride down into Glen Nevis with the highest point in Britain, Ben Nevis (4,413 ft), as the backdrop.

You can take the early train from Fort William to Bridge of Orchy to start your adventure. The ticket cost is about £10 but you should consider reserving a space for your bike in advance.

Expect to get wet. There are a lot of water crossings even if it doesn't rain. It's Scotland, so even if it's sunny when you start, it's likely to rain somewhere along the route. Parts of the route can be very exposed (and windy) in bad weather.

The ride starts in Bridge of Orchy at the head of Glen Orchy. The southern range of the Grampian Mountains lies behind you as you climb the route of an old military road over the first climb of the day. This one is about 500 ft over 1.5 miles. It starts through a dense forest but once above the forest, the path becomes rocky and the view of the Grampian Mountains improves. From the summit (Mam Carraigh), you'll have a good view of Loch Tulla with the wild Rannoch Moor in the background. The descent is a jolly good rocky affair. If you want to skip this initial climb, there is a road along the River Orchy and Loch Tulla to Inveroran.

From Inveroran, follow a paved road for a short distance to Victoria Bridge over a tributary of Loch Tulla. Another segment of military road then takes you to across the Rannoch Moor past the entrance to Glen Coe ski resort to King's House on the A82 (take care crossing the A82). This section of military road has embedded cobblestones that are neatly arranged like well-queued British subjects. It is relatively flat and easy going, giving you time to admire the surrounding grasslands, lochs, and a couple of bridges that surely date from the 1700's when the road was built.

From King's House, the trail becomes a more difficult rocky singletrack, roughly parallelling the A82 through Glen Coe for several miles. When the singletrack finally reaches a car park at the A82, you've reached the aptly named Devil's staircase. That earlier bit about a wee climb was a bit of codswallop though. This is a steep, bloody difficult climb (800 ft in one mile) on loose, babyhead rocks with increasingly tight switchbacks near the top; bring your best grippy tires. The many hillwalkers will still be gobsmacked to see you even if you have to carry the bike the last bit.

Your reward for reaching the top is a commanding view of Glen Coe and the surrounding mountains as well as the Blackwater Reservoir... and also the magnificent descent into Kinlochleven. Here the trail can have a bit of water on it but the rocky surface drains well. Be aware as there are some box culverts along the descent that are just the right width to completely swallow a front tire causing a rather spectacular endo. There's also a few sections of singletrack that some might consider a bit dodgy, but these will keep the advanced crowd interested. Towards the end, a nice forest road finishes the descent into Kinlochleven.

The climb from Kinlochleven (700 ft in one mi) is no less of a bugger than the Devil's Staircase. (Oops more codswallop about the wee climbs... sorry about that). There are several armored sections a couple hundred feet long and multiple step ups. If you don't normally ride 35 miles and/or are not a pro, expect to walk a good way. It's the first major section of trail through woods though, so if you're lucky enough to catch one of Scotland's sunny days, you'll have some shade.

Finally, you pop out of the trees onto the old military road. This section is also quite rocky (babyhead and/or gravel most of the way); except the rocks are strewn about all higgidly-piggidly, in stark contrast to the earlier military road sections. The military road climbs gently for two miles before beginning the long (mostly) descent into Fort William. This valley is also quite beautiful but do watch out for sheep.

At around the 30 mile mark, the WHW leaves the military road onto a singletrack. The singletrack used to go through a woods but part was logged in 2017. A steep but otherwise easy peasy forest road descent then takes you to Glen Nevis and Fort William.

The West Highland Way was Scotland's first long distance hiking route (and now it's open for mountain biking too). Parts of the route follow historic military and parlimentary roads dating from the 18th century. The roads were built as a means to control the local population following the Jacobite rebellions. 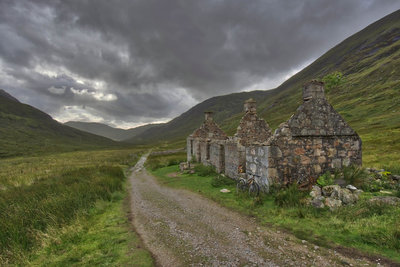 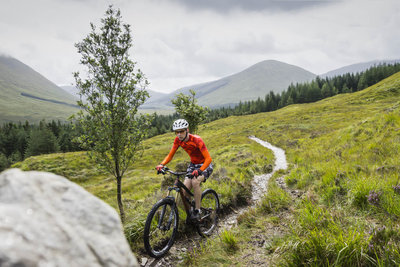 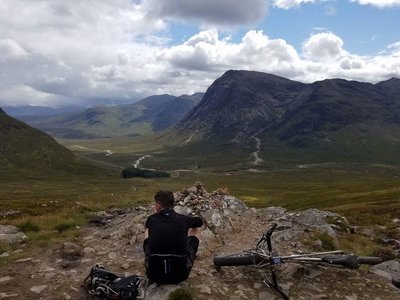 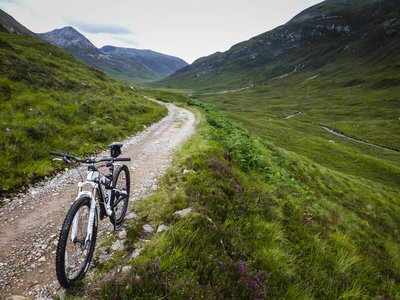 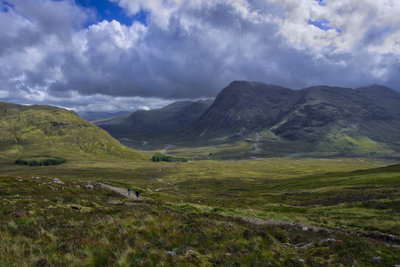 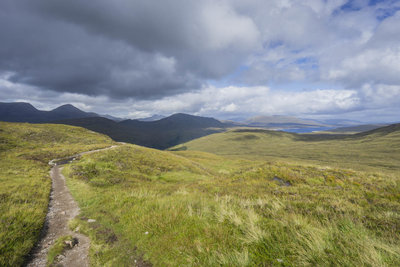