“A rough 4x4 road gives way to singletrack as it climbs the beautiful and remote Glen Tilt Valley. Watch for sheep. ”

The ride starts in Blair Atholl, which is near Blair Castle (worth a visit if you like castles). It climbs at a pretty steady 2-3% grade for its entire distance, but the track is at times rocky (particularly after it becomes a singletrack) and thus it can be a little more difficult than the trail details suggest. The Munro called Beinn A'Ghlo (1121 m; 3973 ft) will be to your right the whole time. There are a couple of beautiful valleys that break off towards Beinn O'Glho. The first is the Allt Fheannach (creek) at 9.5 mi. Even more beautiful is the An Lochain (creek) at 11.5 miles.

For the first 2.5 miles, a good gravel road passes beneath the forest canopy. You're roughly paralleling the River Tilt, which you'll mostly hear but not see through this section. At 1.7 miles, you'll cross over the river on a bridge. The river looks like Scotch, and considering this is Scotch country - well, maybe that's where the color comes from.

Once you break out from the trees, you've entered sheep territory. You'll pass a number of farms over the next several miles. You'll cross another bridge back to the west bank of the River tilt at 4.8 miles. As you progress into the valley, the sense of remoteness increases and the vistas of the highlands become increasingly vast. The last vestige of civilization is the Forest Lodge hunting lodge at 7.5 miles. After this, the trail becomes a doubletrack and more rocky.

At around 11 miles, the road forks to the left and Glen Tilt continues as a singletrack following the River Tilt.

The next highlight is the Falls of Tarf on the Tarf Water (creek) at 12.5 miles. There is a very elaborate Victorian era (1886) suspension bridge (Bedford Bridge) that seems out of place crossing the Tarf Water affording a good view of the falls. The bridge is named in memorial to Francis John Bedford, who died trying to ford the Tarf Water in 1879. Queen Victoria passed through in 1861.

The turnaround point is just past the Tarf Water at the Allt a' Ghlinne Mhoir valley, but a faint trail continues over the pass to Braemar.

Scotland has a very progressive Outdoor Access Code, which essentially guarantees everyone the right to access most land in the country for recreational purposes so long as they act responsibly. It was actually a dispute with the Duke of Atholl in 1845 for access rights through Glen Tilt that lead to the forerunner of the Scottish Rights of Way and Access Society, which is the modern day guardian of land access in Scotland. 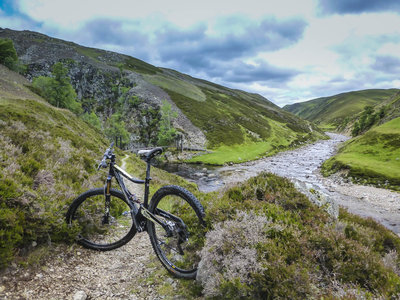