“This very rocky trail goes to Rhododendron Gap, the highest point accessible by mountain bikes on the East Coast. ”

This trail is described from west to east assuming you're doing it as part of the Mount Rogers Loop. It starts a mile high at the intersection with the Virginia Highlands Horse Trail (VHHT): Scales to Crest Trail. From there, you've only got about 200 feet to climb to Rhododendron Gap.

It seems easy enough, but the first half mile is a really difficult, narrow, twisting path with soccer ball-sized and larger rocks embedded in the trail. A lot of people will probably walk parts of this half mile. Once you reach a gate, the trail becomes much more manageable and a narrow singletrack takes you Rhododendron Gap after another half mile.

Be sure to hangout at Rhododendron Gap for a while. I'm pretty sure it is the highest trail legally accessible by mountain bike east of the Mississippi River. Unfortunately, everything to the northwest of this trail (including Mount Rodgers) is Wilderness and you can't take your bike there.

Rhododendron Gap sits between Pine Mountain (5,525 ft) and Mount Rodgers 1000 ft to the east. It is the highest point in Virginia at 5,722 ft. Give a friendly hello to all the hikers hanging out at the gap, enjoy the awesome view to the northeast, and marvel at the cool rock formations before continuing downhill.

From Rhododendron Gap, the trail drops about 800 ft in three miles. The first half mile is the most difficult, steepest part of the descent with a somewhat narrow path between two fences surrounded by high vegetation and a number of blind turns. The whole path is filled with baby head rocks and much of the tread is wide enough to accommodate two abreast. About halfway down, it enters the forest, but count on getting some rays before that.

This trail is popular with equestrians, so watch your speed on the downhill segments, particularly in the first half mile of descent from Rhododendron Gap which is particularly narrow with blind corners. 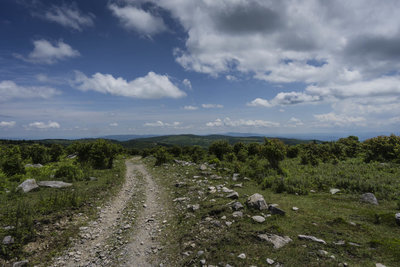 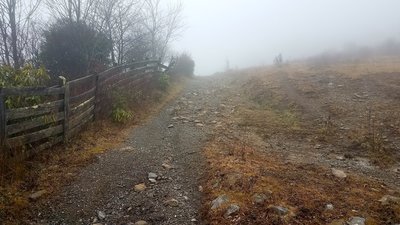 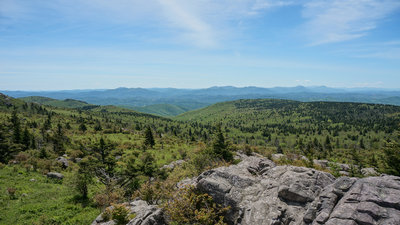 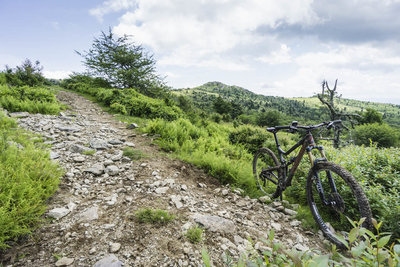