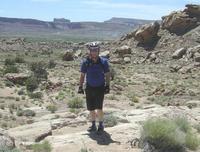 Family Friendly The trails are generally easy to access by families, with several trail crossings over unimproved county roads and ATV two tracks, making it possible for families with kids to bike over shorter treks.

The trails are multi-use trails, and used for cross country skiing and snowshoeing in the winter, so it is considered polite to avoid ski tracks when riding fat tire bikes. I've seen dogs on the trail, both leashed and unleashed, and most owners are very courteous of other hikers and bikers.

Ogemaw Hills Pathway is a rolling, mostly singletrack trail with easier sections grading to more difficult at the north and south ends. The forest cover is mixed, ranging from hardwood, mixed woods, to some softwood hemlock in the north end.

The trail going south from the north trailhead travels along a two track trail on a downhill for about a quarter mile, then leaves the two track for the climb back to the top. It crosses county roads, the ATV trail and a pipeline, but traffic is sparse enough that there are no conflicts.

The trail is a multi-use trail, used by hikers, bikers and geo-cachers. It is used lightly enough that there are few contacts on the trail with others.

Beginning at the north trailhead, the north end of the trails moves through hilly, rolling terrain on top of the West Branch Moraine, through mixed forest types and old farmsteads to some glacial valleys near the north end. Heading back south, the trail passes near the headwaters of the Klacking Creek and then back to the top of the moraine. There are several intermediate loops through the north end.

The southern portion of the loop travels down the south face of the moraine, through mixed hardwood forest and semi-wetland areas, with a couple of bridges over wetland portions. There is an overlook at the southeast end which has recently re-grown after cutting, diminishing the view. There are also some short, steep uphill and downhill stretches in the rolling terrain and south face of the moraine.

There are also several intermediate loops through the South end. On the southwestern part of the trail, one loop travels through a section of large pines and along some steep valleys. On the return trip from the southwest loop, there is one pothole that is wet and slippery in the wetter portions of the year.

The Ogemaw Hills Pathway is on top of the West Branch Moraine, near the Michigan DNR office. The trail going south from the south trailhead passes by the DNR Office and the foundations of the old fire tower. The north end trails, north of the south trailhead, passes through several old, abandoned farmsteads. There are few, if any foundations remaining, but they are recognizable by the domestic tree types in some areas. 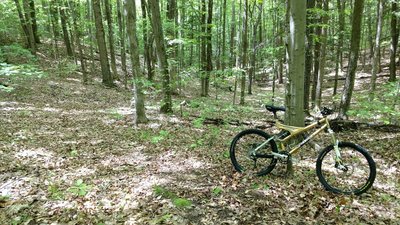 Oct 2, 2020
chris ader
this trail is an overlooked gem of the lower peninsula! it has the longest steepest climbs south of nct (manistee). great for iceman training.
Aug 19, 2018
Christopher Huston