“Climbs to an awesome view with some advanced riding on the way down. ”

After what can only be described as a brutal road climb (Monte Cornizzolo), you'll reach a clearing about 100 m (300 ft) below the summit of Monte Cornizzolo. Monte Cornizzolo dominates the local landscape, so you'll have commanding views towards the south along the route.

Later at the Sasso Malscarpa (Malscarpa Saddle), you've got a cliff-side view of Lecco and the Lago di Garlate (Lake). From the Sasso Malscapra, you've got a very difficult, extremely technical 450-m (1200 ft), three-mile descent. The route then follows forest roads and a short segment on provincial road SP41 back to the start

If you don't have a car, there is a railway station in Canzo with direct trains to Milano about 100 m from the route near mile 10.5.

This loops starts with Monte Cornizzolo, a limited traffic, paved road. You'll start with a 600-m (2000 ft) climb in the first 3.5 miles, so maybe it's good that it's paved.There are rifugi (mountain huts) offering refreshments about 1/3 and 2/3 of the way up the initial climb if you find yourself in need of a breather.

After the first 3.5 miles, the next 2.5 miles are mostly flat. You'll also enjoy some awesome views towards the south since you've worked your way up above the treeline. Starting around mile five, the road roughly follows the ridgeline, so you've also got views towards the north. Keep heading towards the large radio/TV tower and you'll reach the Sasso Malscarpa (Malscapra Saddle). Here there is an awesome cliffside view of Lecco and Lago di Garlate (lake).

From the Sasso Malscarpa, two extremely steep, technical singletracks take you down 450 m (1200 ft) in three miles. The first, Sasso Malscarpa to la Colma, initially winds its way among some boulders right along the knife-edge like ridgeline. Then, you'll plunge steeply downhill through a dense forest to a gap and a trail junction known as la Colma, where the main difficulty is the overall steepness of the trail.

From la Colma, the second singletrack (la Colma to Rifugio Terz'Alpe) continues downhill through the forest to a rifugio (Mountain Hut) where you can stop for refreshments. The overall steepness of the descent continues, but this section is quite rocky and this increases the technical difficulty significantly. As you near the rifugio, the trail becomes wider, but you'll still have to choose your line carefully through the rocks. These singletracks are well forested, but there are some pastures to the left with some goats near the rifugio. Don't take your eyes off the trail too long though, or you'll find yourself lying in the middle of it.

After the rifugio, you've got a mile of relatively flat riding to let your wrists recover from the descent on Via per li Alpi (Way to the Alps). The second part of this forest road features another 300 m (1000 ft), 1.5-mile descent. The road makes a number of switchbacks as it nears the hamlet of Gajum at the bottom.

Once you reach Gajum, you'll follow a number of local roads through the outskirts of Canzo to Strada Provinciale (Provincial Road) SP41. This is also the alternative start/finish point if you've taken the train to Canzo. Follow the busy, and completely flat, SP41 south for about 3/4ths of a mile and then turn left onto Via Segrino to follow an easy forest road on the eastern shore of Lago di Segrino (Lake) back to your car at the starting point. 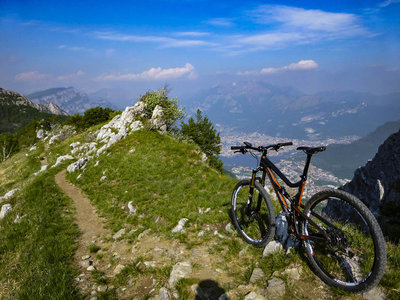 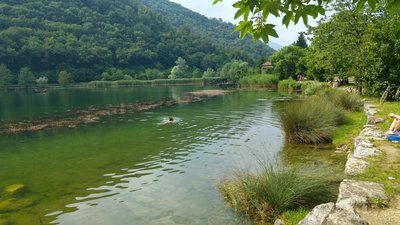