“A ride following mostly forest roads on the German-Czech border with a little bit of history. ”

This ride passes through a heavily forested region on the Czech-German frontier in the Lužické Hory - Lausitzer Gebirge - Lusatian Mountains. In Germany, this region is known as the Zittauer Gebirge and there are a whole series of trails in the Naturpark Zittauer Gebirge (Zittau Mountains Nature Park) as well as the surrounding Czech countryside.

There are some short, fun singletrack descents along this route, but much of the route is comprised of forest roads through the verdant forest. When I rode this, the whole forest was sprouting red mushrooms with white polka-dots, but I don't know if they were magic or not.

The ride goes to the highest point in the range, the Lausche / Luž Peak (793 m; 2600 ft), where you'll enjoy a sweeping view of the German countryside to the north. You'll also surmount the third highest peak Jedlová / Tannenberg / Pine Mountain (774 m; 2540 ft), which is crowned with a mountain hut where you can enjoy a meal with a good Czech beer.

You'll also pass fortifications along the way from the 13th through the 20th century in various states of repair. As you near Oybin and Jonsdorf towards the end of the ride, you'll pass through a cool garden of massive boulders that look like fun to climb.

You'll definitely want a GPX or the MTB Project mobile app to follow this loop. There is a whole network of trails and forest roads in this area, and it could be really easy to get lost. And while that can be fun, if you don't speak Czech it might not be the best time to exercise that option.

The ride starts in the outskirts of Waltersdorf, Germany where you climb the main street (literally Hauptstraße) to the Czech border. Then you continue climbing on Lausche / Luž Peak which eventually takes you to the highest peak (793 m; 2600 ft) in the Lusatian Mountains right on the German-Czech border. Near the top, the path becomes a tight, twisting singletrack, and it's likely you'll have to hike some of the way to the peak. There's a beautiful view into Germany from the top, and then the ride down is easier.

An awesome singletrack descent (Lesné) through the forest is next on the menu, and this takes you to the town of Lesné. Follow the road that continues on the other side of the main highway 9. The road becomes the Tolštejn Castle - Jedlová Peak forest road. Tolštejn Castle was an important fortification in the Thirty Years War (1618-1648) but it has lay in ruin since 1642. A mountain hut with an excellent Czech beer awaits at the top of Jedlová Peak (775 m; 2540 ft; third highest of the range). From there, the aptly named Jedlová Ski Slope trail descends 150 m (500ft) at 20% grade.

Then you can look forward to relatively easy spinning on Jedlová Loop, Mellow Mushroom Road, and Magic Mushroom Road. These are forest roads passing through the dense, verdant coniferous forest covering this area. You may find the area covered in mushrooms with 4" crowns in red with white polka-dots if you come at the right time of year. You'll have to get a mycologist to determine whether they are mellow and/or magic.

After Magic Mushroom Road, there is a three-mile stretch on lightly used, paved road through the Czech countryside. This brings you back to the Czech-German border. There is a short gravel road segment, Grenzstraße right on the border. From here, you'll have a good view of a cloister castle across the valley in Oybin.

After you return to Germany, you'll go up and down three hills again following a number of shorter tracks: Eschengrundweg, Talringweg, Thomasweg, Gerölleweg, Jonsdorfer Felsenstadt (Jonsdorf Rock City), Hohlsteinweg (Hollow Rock Road), and Butterberg. These are variously connected with short road segments. (Did I mention it might be helpful to have a GPX or the MTB Project mobile app?)

The climbs along this half of the trail in Germany aren't as difficult, as steep, or as long as the ones in the first half in the Czech Republic. There are some unusual boulder formations along these trails. Some of them you'll see from a distance, and some of them you'll ride in the shadows of.

Eventually, hopefully, you make it back to your car in the outskirts of Waltersdorf. Or for those without a car, there is a train station in Zittau which is only a few km from this ride.

This ride starts with a history lesson at the Czech-German border. A plaque commemorates the site of a Czech customs house that was raided as part of a string of border incidents in mid-1938 used as a pretext by the Nazi's for the annexation of the then predominantly German inhabited Sudetenland region of then Czechoslovakia.

This forest road also passes near the ruins of Tolštejn Castle, which was an important fortification during the Thirty Years' War. It was destroyed during a siege in 1642 and now there's not much left to see. Another cloister-castle is present near Oybin and there are fortifications from the 20th century along the route as well. 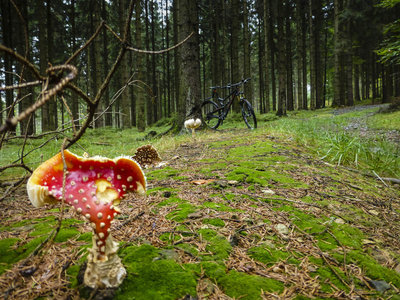 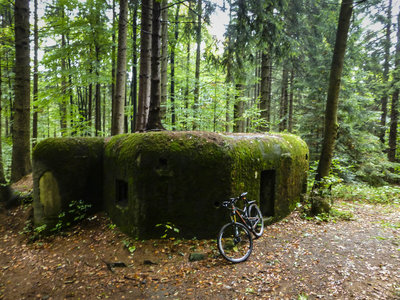