“A long climb is rewarded with a quick ride around a remote alpine lake and a long steep descent on an ancient stone road. ”

A pristine loop around an alpine lake awaits at the top of a long climb through the Val d'Ayasse (Valley). Portions of the ride follow the ancient Strada Reale di Caccia (Royal Hunting Road), which is showing its age in some sections and is decidedly more technical than one typically expects from a "forest road".

Start by parking near the base for the ski lift (it doesn't run in the summer) in the small village of Chardonney at the end of the valley. You'll have to drive here unless you want to climb all the way up from the main highway in the Val d'Aosta. From Chardonney, head down the valley on the regional road SR2 to the larger village of Champorcher. In the center of this village, turn left to begin the Champorcher to Dondenaz Forest Road.

Initially, an asphalted road climbs along several switchbacks to the hamlets of Collin, Grande Mont Blanc, and Petit Mont Blanc in the first two miles. Shortly thereafter, the road base switches to dirt and this dirt road clings to the side of the mountain high above the Torrente Ayasse (Creek) as it steadily climbs to Dondenaz. There are a few short, steep sections of greater than 10% grade but the main difficulty is the continuous nature of the climb along with the altitude. You'll have beautiful views to distract you from the climb though.

Lago Miserin lies about 400 m (1,300 ft) higher along the Strada Reale di Caccia (Royal Hunting Road). There is another mountain hut, the Rifugio Miserin, at the lake where you can also take an easy singletrack (Giro di Lago Miserin) around the small alpine lake. Or take a dip in the lake. If it's still early in the season, you'll likely get your feet wet crossing the far (southern) end of the lake where a wide stream fed by melting snow enters it.

This starts as a narrow singletrack through a pasture that parallels (and joins for a short distance) the Champorcher to Dondenaz Forest Road. You'll likely encounter livestock (the cows are docile but give them appropriate space), and you'll have to open and close electric fences behind you. After 1.5 miles, the trail transitions to a doubletrack, and you'll enter a three-way intersection near several buildings. Continue straight to head down towards a bridge over the Torrente Ayasse.

As the doubletrack nears the Torrente Ayasse, it enters a dense forest, and the route remains mostly forested until it reaches Chardonney. Around the 17-mile mark, the trail opens into a clearing. From this point, the trail base switches to stone, dropping about 400 m (1,300 ft) in two miles. At points along this section, the stones in the roadbed are very loose and rutted, so watch your speed and bring your best bike handling skills. There are also a number of sharp turns along the way, so hopefully you've checked you brakes at the outset of the ride.

There is a small parking area next to an informational sign just to the north of the Torrente Ayasse at the end of the Champorcher to Dondenaz Forest Road if you want to skip most of the climbing, but then you would miss the fun downhill segment on the Strada Reale di Caccia (Royal Hunting Road): Dondenaz to Chardonney.

From Lago Miserin, you can also traverse the Finestra di Champorcher pass at 2827 m (9,275 ft), an additional 250 m (800 ft) of climbing to head west towards Cogne. You'll likely have to wait until mid-July for the snow to melt through the pass, and you'll definitely need a shuttle. 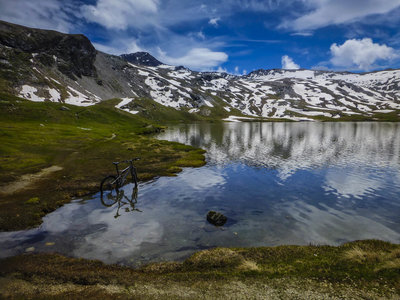 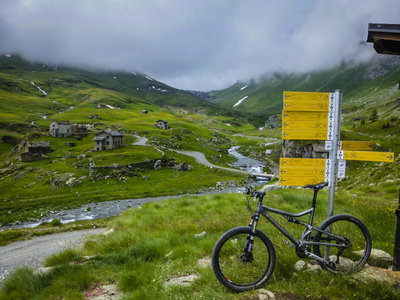