“This is the route used by the famous 24 Hours of Finale Ligure endurance race. ”

The 24 Ore di Finale Ligure endurance race has been held annually since 1999. It offers both single, double, and team configurations, but they all have the same goal: the person/group with the most loops wins. It just happens to use some of the most scenic trails in the Finale Ligure region.

Note that the route shown here is for solo/double entrants for 2017. The team route is slightly different and the exact route varies from year to year.

The race features thousands of participants with a festival atmosphere including camping, concerts, etc. This year's theme is superheroes.

The registrations for the race fill early. Obviously, you'll need lights to ride at night - they won't let you on the course without them.

This route starts at the Agriturismo Ferrin, which is a good place for food and beverages before or after the ride (or perhaps between loops if you are just practicing for the race).

In any event, you'll probably find the place covered over with other bikers most of the time. You'll start the loop with the easy Strada del Semaforo di Capo Noli forest road. At the end of this, you enter the 24 Ore di Finale Ligure Trail section which has formed an integral part of the race loop throughout its history.

First, you'll parallel the Ligurian Sea about 800 hundred feet above the sea. After about 0.4 miles, the track turns sharply away from the coast and you'll follow a narrow singletrack that climbs sharply back towards the Strada del Semaforo di Capo Noli forest road. The trail turns abruptly back towards the sea just as it reaches the forest road.

This fun singletrack continues back again for a second time to the Strada del Semaforo di Capo Noli forest road and then again it turns abruptly towards the sea. This section is not forested, so you'll have excellent views of the Ligurian Sea in front of you. Be prepared for a right turn at an intersection about a quarter mile after you make this second turn towards the sea.

From this intersection, you have multiple routes downhill towards the sea but it is a long ride back up. Save the downhill for another day and take the right turn to follow the 24 Hours of Finale Ligure route. After you reach and cross the Strada del Semaforo di Capo Noli forest road for the final time, the singletrack becomes steeper until you reach the junction with the appropriately named Toboga (Toboggan) segment which completes the singletrack portion of the 24 Hours of Finale Ligure race.

The Toboga (Toboggan) is a particularly fun stretch that also plays prominently in the race course each year. The trail passes through the forest and features bermed turns, switchbacks, and both small and large jumps. Especially during the race it can get a bit muddy and that can significantly increase the challenge. 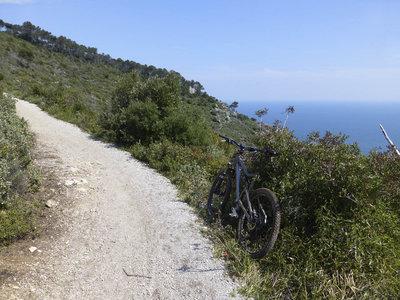 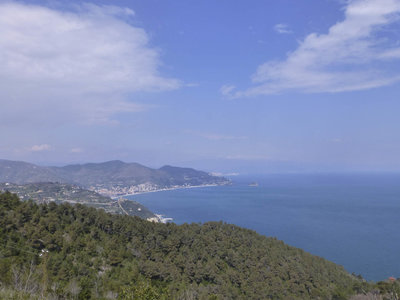