“A ride on the high plateau of the Apennine Mountains traversing the ruins of the Rocca Calascio medieval castle. ”

This ride circumnavigates a good portion of the Campo Imperatore (Emperor's Field) which is a high plateau (1500-1900 m; 5000-6250 ft) region nestled in the Apennine Mountains of central Italy. The Campo Imperatore is part of the Gran Sasso e Monti della Laga National Park in the province of Abruzzo, and impressive views of the beautiful Apennine Mountains abound on this ride.

The ride starts in the fortified medieval village of Santo Stefano di Sessanio, which was unfortunately partially destroyed by the l'Aquilia earthquake of 2009. (Additional earthquakes have occurred in the vicinity during 2016). Along the way, you'll pass by the impressive ruins of a 1000-year-old Rocca Calascio castle and the surrounding (and still inhabited) medieval village. Once you reach the Campo Imperatore, you'll have views of the Corno Grande, which is the highest point in the Apennine Mountains at 2912 m (9554 ft).

Most of the ride is on doubletrack or forest roads although there are short sections of singletrack and provincial highways. It's a very isolated area even though it's only about 50 miles from Roma (Rome), so unless you do the ride in August when all of Italy is on vacation, you'll probably have most of the place to yourself. Because of the high altitude, snow can be present from October through early-May.

This area is not served by public transportation. You'll definitely need a car to get here.

You won't find anything in the way of trail markers or directions along the trail and some of the doubletracks are faint (particularly if they are covered in several inches of snow), so a GPX or the MTB Project mobile app are essential.

This description starts in Santo Stefano di Sessanio where there is parking, hotels, and restaurants. You could also park in the village near Rocca Calascio (limited services) or just off SS17bis where it meets the unnamed paved road near mile 23.5.

From SP7 just north of town, proceed north on SP97. After 1.3 mi, the paved road makes a hairpin turn. Instead continue straight onto the gravel road which is not as steep. At 2.2 mi, turn onto the doubletrack that climbs again towards the Rocca Calascio, which should now come into view. Once you've made the obligatory tour of the Rocca Calascio castle ruins, descend through the small medieval village at the base of the castle. At the third hairpin turn (with a small fountain), turn left onto the Experimental Sheep Farm Trail.

A short distance later (around the 5-mi mark) veer to the right onto a doubletrack. At 5.5 miles just before the main path makes a hairpin turn, continue straight onto the fainter doubletrack which proceeds downhill. At mile 6.6, you'll approach the paved SP7. Just before you reach the SP7, turn left onto the gravel road that climbs uphill, the Cancello Imperatore (The Emperor's Gate) trail which takes you to SS17bis in the Campo Imperatore. This section is particularly beautiful, and very isolated, passing through farmland with views of the Apennine Mountains. It features a near continuous 500 m (1500 ft) climb over four miles.

Next, you'll pass the Rifugio Fonte del Cane (Fountain of the Dogs Mountain Hut) around mile 11 where you may be able to obtain food and drink during the summer months. About one mile before you reach SS17bis, you'll reach an intersection with a small fenced structure and a fountain. It is at this point that the Corno Grande first comes into view with a large portion of the Campo Imperatore in the foreground. Turn left to proceed downhill towards SS17bis. If you do this in late spring, as I did (or presumably late fall as well), you may find yourself walking through the snow for much of the mile or so to SS17bis, but you'll also find the entire Campo Imperatore covered in spring wildflowers, or at least the parts that are not still covered in snow.

When you reach SS17bis, turn left and follow it for about one mile. Then turn left again onto the paved SP97 towards Santo Stefano di Sessanio. After about 0.75 miles (roughly 15.7 miles total), turn right onto a singletrack which is the Vendetta Imperatore (Emperor's Revenge) trail. At this point, the Rifugio di Lago Racollo (Mountain Hut of Lake Racollo) will be on the right, again offering a chance for a break in the summer months.

At 17.3 miles, there are the impressive stone ruins of what might have been a farm or barracks. You'll pass by a second small lake. Then you begin a climb through a small ravine towards SS17bis again. The climb is first gentle but the last half mile after a third alpine lake before SS17bis is significantly steeper. And I can tell you that if you have encountered a little bit of snow earlier when you first reached the Campo Imperatore, you'll encounter a lot of snow in this ravine until you reach SS17bis again.

Apparently the Emperor extracts a high toll on those who would tread on his private meadow. When the singletrack (and for the moment, the climbing) ends at SS17bis, turn left and follow SS17bis for about three miles which also descends about 1000 ft. When you reach a four-way intersection (at about 23.5 mi), turn left off of SS17bis onto an unnamed paved road. Proceed past another small lake.

At the intersection near mile 25, continue straight onto the doubletrack which is the start of the Experimental Tree Farm Trail. At mile 26, you begin a half mile of 20% downhill. Then there is one more 400-foot climb before the end. Keep to the left at the next two intersections until you reach the outskirts of Santo Stefano di Sessanio. 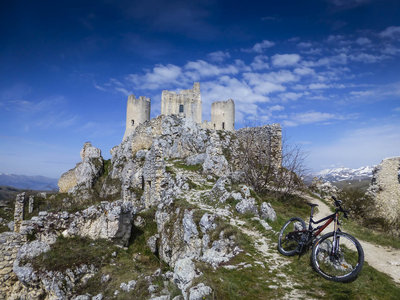 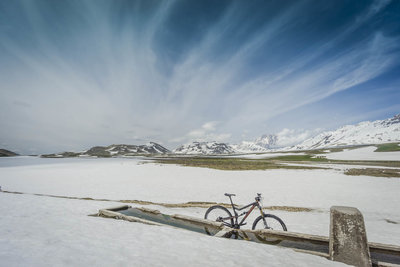 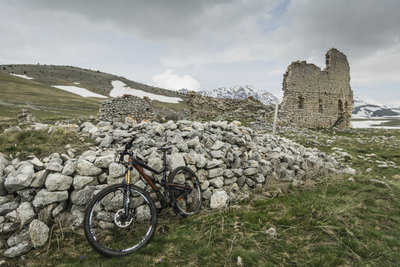 All Clear 60 days ago See History