“The crown jewel of the Molalla Recreation Corridor features a healthy climb and lots of fun. ”

The singletrack trails in the Molalla Recreation Corridor are closed to bikes and horses when the trails are wet, and also between October 15 and April 15 every year. The doubletrack is open year-round. Singletrack trails are marked as "Seasonal" on signs.

The Molalla Rim Loop is a great ride around the perimeter of the trails that make up the southern section of the Molalla Recreation Corridor trail network.

These trails are considered more popular and more "intermediate" than the northern section of trails. This can be linked up with the several trails that make up the middle or "marrow" of the network. Despite having a lot of climbs, the forest is beautiful and the trail is pretty darn fun.

The Molalla River Watch is the non-profit organization that we have to thank for this great trail system. It's obvious from the start that the area is lovingly cared for by very passionate people. Be sure to respect the trails and others. There is a donations box at the trailhead. Personally, I returned the awesome glossy map that I took from one of the map boxes. It can do someone else some good!

From the parking lot, the Hardy Creek Trail quickly opens up from between the bushes and becomes loose and choppy doubletrack. The climb isn't brutal but it'll make your legs burn. At the top, there is an information kiosk. If you're lucky, some awesome glossy paper maps will be inside. Be sure to return the maps if you feel you won't want one for after the ride. Someone did a great job with the maps!

Head north by staying to the right and follow the doubletrack a little further. It won't be long before you'll see signage for the Rim Trail. This will be the trail to follow for most of the ride. The Rim Trail starts with a steady supply of climbing. Obstacles such as roots and rocks are not uncommon but most are not too bad to scale. Because these trails are also frequented by horses, some parts may be a little torn up but it shouldn't be too bad.

The trails in this network are well signed so it should be easy to stay on the Rim Trail. Typically, you'll veer to the right at any junctions, but keep your eyes open nonetheless. Between bursts of climbing, the trail will mellow out on flat stretches, often very close to the border between BLM and private land. A lot of the private land is cleared so it can be a nice change of scenery.

After a long, flat, and slightly downhill stretch next to some recently logged land, the trail comes back to old doubletrack. The left direction descends downhill back towards the Huckleberry Trail, which is the main pipeline back to the trailhead. To the right, the marked Rim Trail follows the gravel as it briefly climbs and then mellows out again.

A tame downhill on the gravel will abruptly offshoot to the right, heading back onto the singletrack. It's marked with a sign but don't miss it! This singletrack will wind itself through a tighter forest.

Eventually, you might find yourself overcome with a little vertigo. The trail very steeply descends to cross an unnamed spring. As if the large rocks weren't bad enough, the dirt is extremely loose. Only the most confident riders will want to attempt this. Even then, I'm not sure how a bike could make it back up the other side! No shame in pushing up this hill, it's a doozy.

The trail returns to mostly level singletrack, albeit a bit narrow between the undergrowth. After some more riding, the junction between the Rim Trail, Bobcat Trail, and Red Vole Trail will come up. To the left, the Bobcat Trail is gravel doubletrack that descends straight down the ridge. To the right is the much more beautiful and fun Red Vole Trail. Take that.

The Red Vole Trail mostly descends along long switchbacks through an open conifer forest. The forest floor is a sea of ferns in the summer. This is the most beautiful part of the ride in my opinion. All of that climbing is rewarded with a fun and slightly technical descent. Stay on your toes, and you'll be fine and have a blast!

At the bottom, the Red Vole Trail meets up with the Bobcat Trail. However, head straight across at the junction to the Squirrel Creek Trail. This flowing, winding descent feels the most like "purpose-built mountain biking singletrack." It's fun!

At the very bottom is the junction with the Huckleberry Trail and the Yellow Gate Trail. There will be a fairly dilapidated kiosk here, likely without anything useful on it.

To the right, Yellow Gate Trail goes down to the Annie's Cabin Trailhead. Continue to the left to follow the Huckleberry Trail back to the trailhead. Reminiscent of Forest Park's Lief Erikson Drive, this wide doubletrack passes the somewhat eerie Annie's Cabin. Take a rest if you desire. Huckleberry Trail is a combination of flat sections, long gradual uphills, and a final blistering downhill to the car.

Along Huckleberry Trail are several trailheads for the trails that make up the marrow of the Molalla Recreation Corridor. Be sure to experiment and explore the network.

In 1992, the land we now call the Molalla Recreation Corridor was acquired by the Bureau of Land Management, putting it into the public's hands. Shortly afterwards, the non-profit organization Molalla River Watch was formed as a volunteer-based group to clean up the once polluted river and surrounding area. 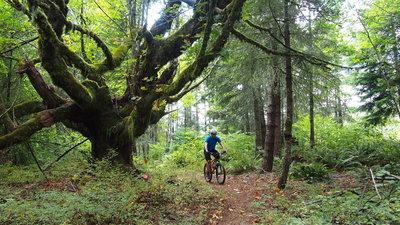 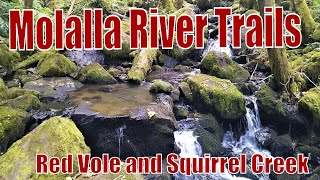 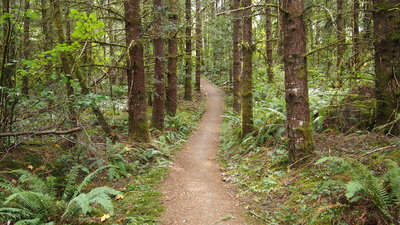 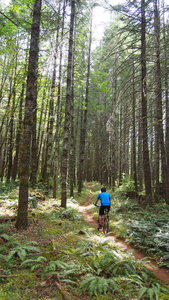 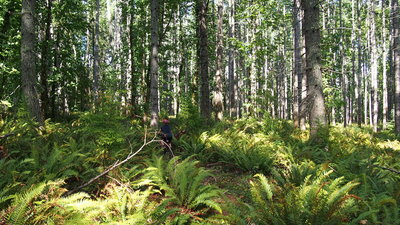 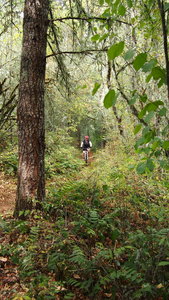