Raptor Ridge is a great trail that is less frequented because of its somewhat remote location. Good as a climb, but better as a descent, it can be accessed from the ends by North Lost Lake Trail and Hemlock Trail, also from the middle via the Huckleberry Trail.

From the Hemlock Trail, Raptor Ridge doesn't look very suited to bikes as the trail is quite narrow and hemmed in by rocks. There's also a picturesque staircase threading between moss-covered boulders. In short, unless your trials skills are well honed, plan on doing a little hike-a-bike from this point.

Very soon, the way is rideable and the trail winds through an alcove with large boulders and shady trees with a distinctly Jurassic feel. The short Raptor Ridge Lookout Spur is a worthwhile detour to a popular sandstone overlook.

Ahead, the intersection with the Huckleberry Trail signals the start of a short descent that ends after a "gotcha" corner beneath the gaze of a stump with a pretty convincing face carved into it. The next third of a mile continues at a very mellow grade through a pleasant forest and crosses one small bridge.

The next switchback ushers in the final descent on a narrow, often exposed, singletrack marked with short root and rock sections. An easily rollable rock ramp proceeds another "gotcha" switchback. As the trail enters its final stages, it follows the ridgeback of a sandstone spine. The trees are tight and the entrenched trail winds its way to the finish with just a touch more tech mixed in. 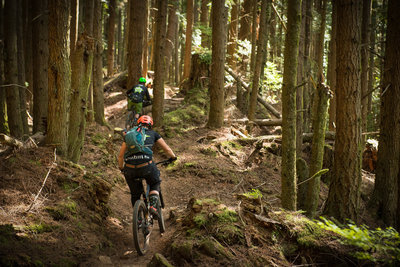 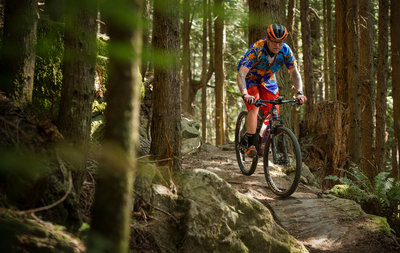 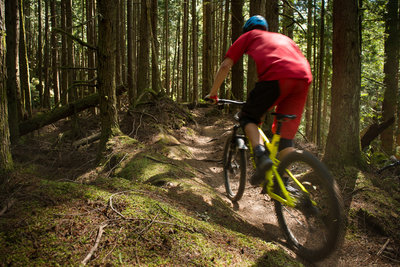 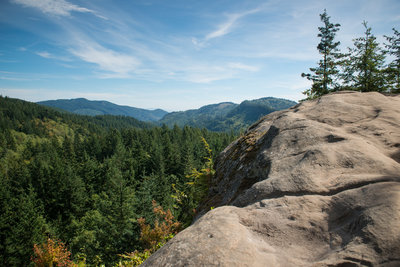