“An easy and scenic long-distance route through the heart of the Black Hills. ”

The George S. Mickelson Trail is 109 miles long. It's an easy route made of crushed gravel and limestone. It features more than 100 converted railroad bridges and four rock tunnels.

There are 15 trailheads, all of which offer parking, self-sale trail pass stations, vault toilets, and tables. Fees: $4/day or $15/annual.

The Mickelson Trail is an easy-going route with mellow grades throughout. The longest and steepest climb is between Deadwood and Dumont, the highest point. The Black Hills surround the trail with beautiful spruce and pine forests.

There are 15 trailheads (listed below from north to south) along the route, allowing for a ride of any distance.

Deadwood:
Deadwood was named for the burned trees the miners found in this area when they came in search of gold. The town was a prosperous placer camp in 1876.

Kirk:
Kirk Power Plant was built in the 1920s to help power the Homestake Gold Mine. Coal came in by rail from Wyoming and a plume of water came from Englewood.

Lead:
Lead, home of the Homestake Mining Company, was originally called "Washington". The Homestake Mine produced gold since 1876, operating both an open cut and an underground mine over 8,000 feet below the surface.

Sugarloaf:
Old railroad ties are still in place under the gravel between Sugarloaf Trailhead and Deadwood. This trailhead is not on the main line, but is part of the fantail loop.

Englewood:
Englewood was established as Ten-Mile Ranch, a stagecoach stop in the late 1870s. The name was changed when Englewood became a railroad center with the construction of the Spearfish branch leading from there in 1893. A roundhouse, depot, water tower and small yard made Englewood a bustling railroad spot for many years.

Dumont:
Dumont was named for an early French settler named Charles Dumont. The town was founded in 1890 as a lumber town and a shipping point for cattle. A spur of the railroad line went northwest to Hanna.

Rochford:
In 1878, Rochford was home to 100 log cabins, three saloons, six stores, two hotels, a drugstore, a butcher shop and a barber shop. Later, a post office was built along with a school house where Annie Tallent once taught. By 1881, there were only three people living in Rochford - the miners had moved to other locations to find their gold.

Mystic:
The town of Mystic, first named "Sitting Bull", has two claims to fame. The first involves gold mining along Castle Creek. An experimental plant was built in 1904 by the Electro-Chemical Reduction Company to extract gold by electro-cynide or electro-chlorination processes.

Burlington Northern Hill City:
Hill City, the second oldest town in the Black Hills, was founded in 1876. Through the years it has been known for its mining, logging, and ranching. Tourism is today's most common draw to the community.

The Mountain:
View the Crazy Horse Monument from this site. Korczak Ziolkowski began carving the mounted warrior in 1948. The Crazy Horse sculpture is planned to be 500 feet high by 600 feet long. Crazy Horse was the Lakota Sioux warrior who engineered the defeat of General George Custer's army.

Harbach Park / Custer:
Custer is the oldest town in the Black Hills. It was named after Lt. Col. George Armstrong Custer whose 1874 expedition discovered gold on the banks of French Creek which was near the present day downtown of Custer.

White Elephant:
Feldspar was once mined at the White Elephant mine on the east side of the highway. The area where the mine once operated is still visible today.

Pringle:
Mining and lumbering are the two main enterprises in the small town of Pringle (once known as "Point of Rocks"). The Buffalo Gap Lumber Company operated here in 1904. The company turned out over 600,000 feet of lumber annually.

Minnekahta:
Minnekahta was originally a water stop and the junction of the Hot Springs branch of the railroad. The water in this area is so hard that water had to be brought in by tank cars, and pumped into the water tower to have it available for the steam locomotives. In the early 1890s, tourists came by train to enjoy the warm water spas of Hot Springs.

Edgemont:
Edgemont was founded in 1889 as the railroad (Grand Island and Wyoming Central - a subsidiary of the Chicago, Burlington, and Quincy) base camp on the south side of the Cheyenne River. Several thousand construction workers and associated crews began building the railroad line that is now the Mickelson Trail.

The George S. Mickelson Trail was completed in September of 1998. 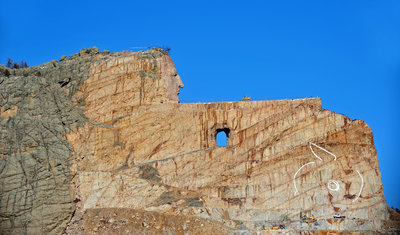