“This ride will show you the best flow on the best trails in Ben's Run. ”

Hunting is allowed so be careful during hunting season.

Ben's Run Trail are completely different from the trails at Charles Fork Lake or really anywhere in the region. Three things to attract you here: 1) you get to ride by a super cool Indiana Jones looking 40' high concrete dam built in the early 1900's that looks like a Roman Aqueduct. 2) There's a winery at the top trailhead where you can kick back by an outdoor fire or in at the bar and enjoy great wine at the end of your ride. 3) Jeff Fetty Designs is at the Artist Colony and you should totally stop in the forge and check out the amazing metal sculpture art.

Technical and not for beginners.

This ride starts at the upper trailhead at the winery. Park here, but don't enter the trails at this point. Ride out past the artist colony and past the cell tower and start at the gate.

Follow Monarch Whistle all the way to Chestnut Ridge Trail and drop down to the lower level from here. The drop is memorable. There's an elbow turn in the downhill that will test your riding skills! Then take the New California trail, which is an epic rock garden from start to finish. It's hard to get much speed on this trail and it is super technical. Unlike any other trail in all of Spencer... but it is cool to have one like this around to keep us nimble.

That trail will terminate into Ben's Run Trail, which you'll ride around to Lobotomy. Lobotomy is the best trail in the system and you may want to loop back onto Ben's Run Trail and ride it again to try to beat your time. It is super flowy and fun. You'll drop down and cross the bridge over Ben's Run on Ben's Run Trail and take a left to ride back up past the dam. Continue on around to Black Walnut Trail where you'll ascend to Monarch Whistle again. This ascent sucks. Worst part of the system and mother nature has made it such that without an excavator we simply couldn't find an easier climb in the place, but Black Walnut Trail is easily the best climb back up.

Jocko's Strut is simply too steep and long (but is a super cool downhill if you ever want to try it). Take Monarch Whistle back around and this time, instead of taking it all the way through, try riding Tanner's Crossroads and then take a left onto Chestnut Ridge Trail back to your car.

The old dam was built around 1910 and decommissioned in the 1950's. It was once the city water reservoir. 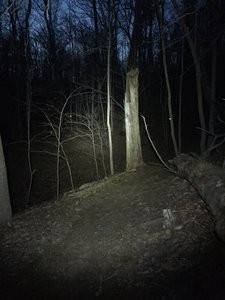 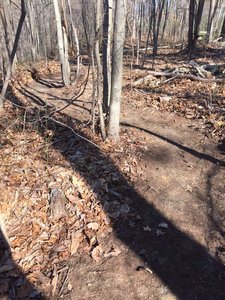 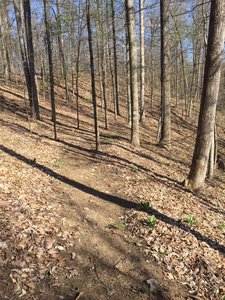 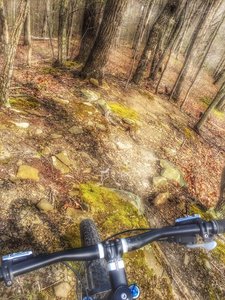 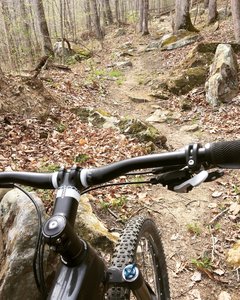