“An epic tour descending into the Pululahua Crater and beyond into canyons above Rio Blanco. ”

A combination of gravel, two track, and singletrack into an extinct volcanic crater and Andean canyon.

It would be best to shuttle this ride, with the drop off point at the Pululahua Guard Station with a pick up on the west rim of the canyon, north of San Jose de Niebli.

There is no signage or marking along this route. Those unfamiliar with the route should use a GPS to follow my route or hire a guide. It would be easy to get lost if not familiar with the area or route.

There is an alternative route to avoid the dangerous stairs of the dead section, but it is not mapped here.

The ride starts at the southern guard station to the Pululahua Geobotanical Reserve, which sits on the rim of the crater. This section follows Via al Pululahua, which descends through cloud forest to the floor of the crater ~2,000 feet below, over the course of about 5 miles. The descent is fast, with numerous switchbacks, loose gravel, potholes and erosion to make it interesting. You'll want to stop to take in the fantastic views of the crater.

After reaching the bottom, there are around two miles of gravel road riding to climb through farm fields to the entrance to the singletrack. There are a few turns, so pay close attention to the mapped track if you don't have a guide or don't know the route. This portion of the ride offers great views of the crater walls you just rode down. The crater walls are nearly vertical, with exposed rock in some places and covered by jungle in others.

After the gravel transition, you reach the most technical section of singletrack on the ride. This section is steep, highly eroded and winds through the humid jungle. As with most trails in Ecuador, this is not a purpose built MTB trail, so it captures runoff and has become entrenched to a depth of ~6'. The trail is loose and rocky, with lots of boulders to navigate. The challenge is raised by the walls of the trench, which don't allow you a lot of room to choose a line. Pick the wrong line and your handlebars will smash the trench wall.

The grade of the trail eventually flattens out as race through some fields and along a short section of two track to get to the entrance of the Mars Zone. This entrance is unmarked and easy to miss. The trail goes through another steep, eroded section of singletrack before spitting you out on top of Mars.

The Mars Zone is one of the most interesting zones I have ever ridden. It is a freeride zone down a section of red, gravelly soil interspersed with scrubby vegetation. The gravel is naturally formed into mogul like bumps and dissected by rolling drainage paths. These features form kind of a natural terrain park to huck off and shred through to choose your own adventure. You'll want to ride this section twice. The Mars Zone and singletrack above it are about 2.23 miles long.

After Mars, your stoke is high, and will remain so as you fly down a two-track farm road cut into the side of the mountain. You'll pass a giant set of abandoned brick ovens on the way down. This section is fast but the two-track is not as improved or 'maintained' as the opening downhill. There are lots of softball sized rocks to look out for and overhanging vegetation to avoid. Try to stay in one of the wheel tracks, because rocks hide out in the grassy strip between tracks. This section is about three miles long.

At the bottom of the two track, the singletrack continues down the canyon wall near an abandoned house. This section of singletrack has more of a cross-country feel, without much elevation loss or gain. It is cut into the side of the cliff, which drops to the left of the trail. The vegetation is thick, so exposure is masked, but it's still unnerving to look down into the cloud forest immediately below your grip. After about a mile, the trail leaves the cliff face at a farmstead and drops right, into the canyon, to follow a confusing network of steep, loamy farm trails which switchback down the mountain. Watch out for mules!

There is a short road section near the bottom before the last segment of singletrack that is aptly named "Escaleras de Los Muertos" or "Stairs of the Dead." This section of trail is more exposed with less vegetation. It is dry and rocky. A few sections have been damaged by landslides, forcing you to climb over debris or across dangerous, loose landslide zones. The soil is loose in these zones so use caution or you could lose your footing and fall. After crossing the slides, there is a final set of steep switchbacks, before you reach a jungle stream and the end of the ride.

Cross the stream and hike up the two track to the end of the route (~1/2mi), where you can wait for the shuttle. 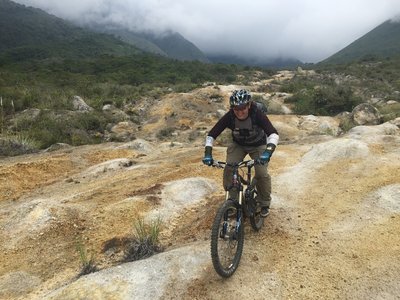 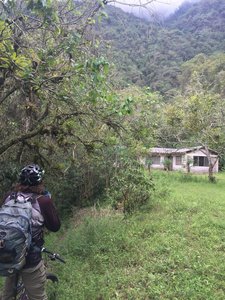 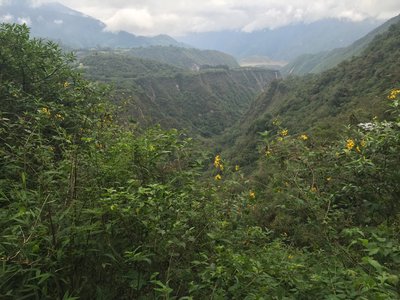 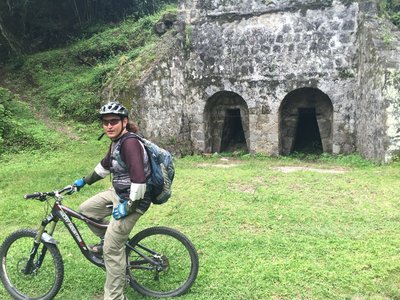 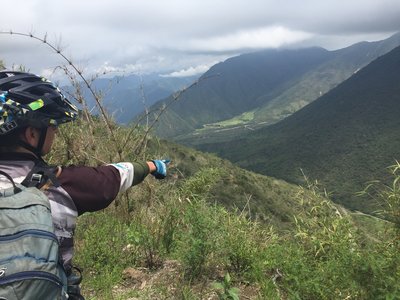 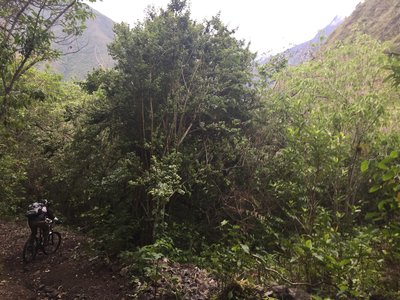