“Some amazing trails with great climbs and descents that takes you out to Mystic Lake. ”

Challenging terrain, and some amazing singletrack. This ride will get you out in the woods, but Mystic Lake is a popular hunting and camping spot, so if you were to get hurt, there are people around.

There are several creek crossings (generally pretty shallow) which have rocks or trees to help you if you don't ride.


New World Gulch Trail #50 (between junctions with Moonshine Gulch Trail #438) should never be biked up. If you bike down, god help you and you had better have some long travel.

Watch for hunters and bears!

I took the New World Gulch trail up, which was a huge mistake. The trail is great until you get the turn off for Moonshine Gulch Trail #438 (0.75mi), then, if you're smart, you should take that right and ascend using Moonshine. I took the left into New World Gulch.

If you need more convincing to NOT take this portion of New World Gulch Trail, read this next paragraph. If I've thoroughly convinced you, skip this paragraph!

This "trail" made me question my sanity and I was actually wondering if the trail maker had made it as a joke. It is very steep, with some stairs and almost no water bars. So the trail was often a muddy mess, steep and un-bikable. The trail had recently been used by horses, and was in awful shape. Parts of the trail were literally covered in horse manure. Literally. They also tend to just destroy trails, so it was pretty terrible. At one point the trail actually just turns into a drainage and goes straight up the middle of a stream. Spoiler Alert: It was muddy.

After you leave the terrible hellhole Mordoresque abyss known as New World Gulch, things get better overall. The trail slowly dried out (hadn't rained in days), and mindless horse trail destruction was fewer and farther between. For a mile or so, the trail widens to fire road width.

The real fun begins when you hit national forest. The trail narrows to singletrack again and begins a descent down a ridge with views of Mystic Lake and the mountains beyond. From here to just before the lake, you're treated so some of the best singletrack around. It's a fun downhill until you hit the north end of the lake (random outhouse is here). After that, you get really, really fun up and down in the woods beside the lake.

Finishing this half of the ride is fairly uninspiring, with a dirt road descent to the lake and cabin area. Really pretty views, but dirt roads just aren't that fun to ride on.

Take in the views, have some food and head back.

On the way back I decided to take Moonshine Gulch rather than the slip-and-slide from hell that was New World. The short ascent was tough and muddy, but it was well worth it. Moonshine Gulch Trail #438 was untouched by hooved demons and thus wasn't actually that muddy. The trail is all singletrack, which gets a little too deep for peddling at some points (might suck going up), but for a descent, it was AMAZING. Let er' rip all the way back to the car.

Satan has a second home in New World Gulch. It is terrible. 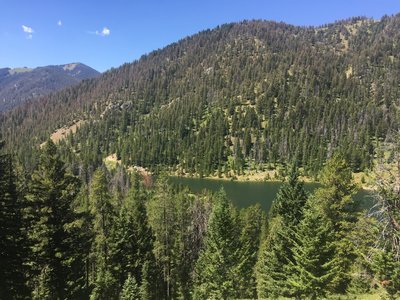 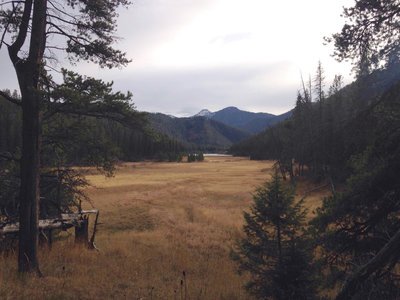 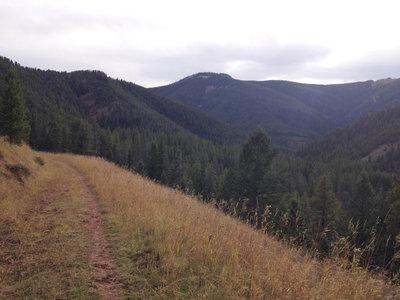 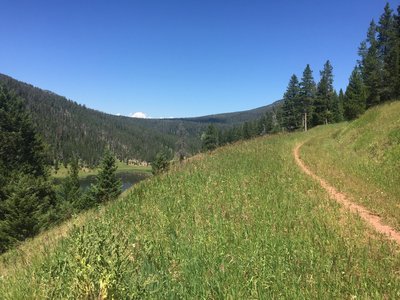 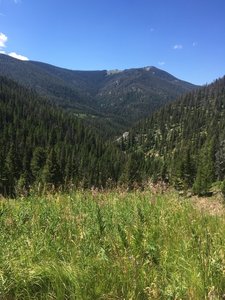 Jul 24, 2018
David Rhine
Over grown, parts of the trail completely ruined by horses, be ready for lots of hike a bike. 14.5mi