“The perfect ascent to compliment the Killpecker Trail (#956) descent. ”

This trail is open to motorcycles, and Elkhorn Baldy Road at is southern end is very popular with jeep and OHV riders. The trail also passes through heavy beetle-kill, so even though local trail orgs have done great work keeping it open recently, don't be surprised if you have to portage a tree or two.

North Lone Pine Trail is a substantial, rigorous climb with a great backcountry feel through lodgepole pine, spruce, fir, and aspen. There are views of Red Feather Lakes and South Bald Mountain as it passes between Deadman Road and Elkhorn Baldy Road/Forest Road 517.

After the second forest road crossing, the trail gets steeper and narrower, with an uneven surface of granite chunks closely packed with smooth dirt. The grade remains rideable, but between the irregular surface and the elevation, it's equal parts technical and fitness challenge.

Around 2.6mi from the trailhead, you'll hit a high point and start a tightrope descent on narrow, rocky singletrack. Speeds and cost of failure are low, but you'll need to stay fluid and keep off the brakes to avoid hiking. The trail wavers up and down, in and out of drainages for the next mile or so, all without losing its wild, rocky character.

While the tread and and surrounding trees keep things narrow, each intermediate high point offers space to rest and take in views through the trees. On the whole, it's more rideable than not, but you'll need to some serious skills to clean all of it, and opportunity for sessioning abounds.

Things begin to flatten out and get less technically challenging again around mile 4, but the trail soon passes through a local low point that can get pretty swampy, even later in the season. The final climb out of this section changes in character, becoming gravelly and dry in spaces, before a final pine-covered tree tunnel out to Elkhorn Baldy Road/Forest Road 517.

A great loop option is to head less than one half mile west on road 517 to the south end of Killpecker Trail (#956). 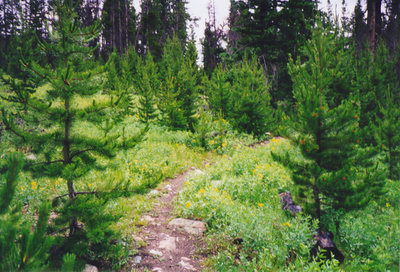