This trail combines newer singletrack with old ATV trails. It was made as an alternate way back north on what's known as the River Trail. It has some rather steep hills. Due to many years of illegal ATV use, there are many intersections and trail crossings that can be quite confusing without a local rider or a good map. The MTB Project mobile app can be useful for navigation, too.

Referred to as the River Bluffs Tract by Saint Joseph Parks and Recreation and River Bluffs Park on many maps, it is the park that's not a park. Huh? Yes, this originally was supposed to be a massive park in the early 1900's. However, it never came to be. Several attempts were made to develop it over the years. It even has two stone structures built in the 1930's that remain to this day.

The trail begins on the north side of Roy's Branch creek at the bottom of Lower River Bluffs. t opens like any other singletrack. However, the first significant climb goes up a concrete ditch. It's textured and provides great traction. It levels out and then climbs a bit more before it descends rather steeply. Upon descending, eye the turn to the left out of the ditch for proper setup. There is a little more singletrack before the trail intersects another concrete ditch. Note that there are two ditches merging at this point. Just stay on the steep one to the left and climb it over the top of another hill. Again, watch for your turn to the left upon descending for proper setup.

After climbing a very short bit to the left from the turn off the ditch, the trail comes within a few feet of Lower River Bluffs trail. Just ride parallel between it and the fence on the right to stay on track. Shortly after this close meeting with Lower River Bluffs is where the trail begins to mingle with the East Side Legacy Connector trails. Reference the maps and keep the MTB Project mobile app handy to avoid confusion.

Once reaching the old park ruins, there are optional northbound connector trails that all meet at the same spot. Northbound Option is the shortest and most fun. The first steep uphill after the park ruins is shared with Northbound Option. The top of this hill is where The Comeback Trail turns off to the left. his will cross the Shouse House Legacy Connector before meeting both connectors at the bottom of the hill. The trail has no more surprises and continues north until it meets Conservaton land. Turn right and climb. The trail follows a guardrail and then turns left to briefly meet B-Line. 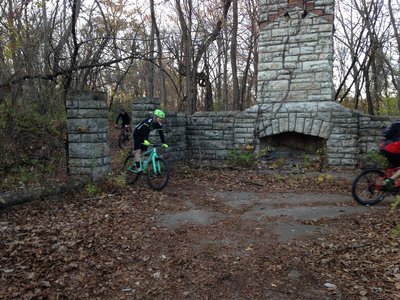