“A great multi-surface loop for after work rides in Arlington and Fairfax Counties.”

The Arlington Singletrack Tour is a ride through Arlington and Fairfax Counties that uses bike paths, bike lanes, and roads to link up the stream valleys and pocket park trail systems inside the Beltway.

Terrain varies from rocky, technical, rocky singletrack to pavement, but delivers riders some of the most beautiful parts of Arlington and eastern Fairfax.

These trails are multi-use and can become quite crowded on nice weekends. Glen Carlyn Park, in particular, has a significant pedestrian population and an active dog park, so ride courteously and be aware of traffic on the road portions of the ride!

While you can start from any point on the loop, Glen Carlyn Park in South Arlington offers ample parking and the highest concentration of singletrack of any of the parks on the ride and it's the suggested starting point for those coming from out of town.

Starting from Glen Carlyn's lot, cross the bridge over to the dog park and begin by climbing the cobbled doubletrack. You'll find numerous right turns off this doubletrack that take you the ridge top trails paralleling the paved multi-use path. Once you've have had your fill of this picturesque mountain laurel forest, drop down the paved path and cross the stream. The west side of Glen Carlyn has an awesome bench cut through trail, paralleling the Washington & Old Dominion Trail. Riding the trail East to West results in the shortest climb and sweetest downhill.

Head West on the Washington & Old Dominion Trail, crossing under Arlington Boulevard. Just after the bridge, take the paved trail on your right, crossing Four Mile Run and climbing into the neighborhood, and exit onto North Greenbrier Street. Continue uphill, turning right on 2nd Street North and right on North Edison Street. The entrance to the Lubber Run Trail will be on your left, just before the intersection with Arlington Boulevard.

This trail begins with a downhill with a surprising amount of exposure, and a small rock feature, so be cautious! Descend into the park, cross the bridge after the amphitheater to pick up the last piece of singletrack in the park, before looping back on the park's gravel trail and climbing back the way you came, all the way up to Edison Street before rejoining the Washington & Old Dominion Trail westbound. This park is optional but well worth a side trip! Lubber Run Park hosts many free performances at the amphitheater during the summer months, so don't be surprised if the park is crowded on nice evenings.

Continue west on the Washington & Old Dominion Trail, and don't miss the parallel doubletrack climb just west of Wilson Boulevard! Merge onto the Four Mile Run Trail, on the south bank of the creek, and continue, crossing North Ohio Street and entering the Madison Manor Park Trails. Ride across the field and duck into the singeltrack on the west end of the park, and continue up the hill after crossing the gravel neighborhood access trail.

The trails at Madison Manor wind around Brandymore Castle, a large, steep hill, ultimately cresting at a rock outcropping that's an excellent skills builder. The trails are non-directional and intertwined, so the route around and up the hill is a choose your own adventure.

Continue to follow the Washington & Old Dominion Trail west, to Great Falls Street, and turn right. Continue north on Great Falls to the Pimmit Run Stream Valley Park between Kirby and Lemon Road, the Pimmit Run Trail trailhead will be on your right. This is the longest portion of singletrack on the route though there are several at-grade street crossings of busy roadsuse caution!

The bike-legal Pimmit Run Trail dead ends at the Highland Swim Club on Bryan Branch Road. From here, the route follows established road routes back into Arlington, and the variations are endless.

To close the loop, head back to Westover via Chesterbrook Road and Williamsburg Boulevard as shown on the map, and treat yourself to some refreshments at The Italian Store or Westover Market! 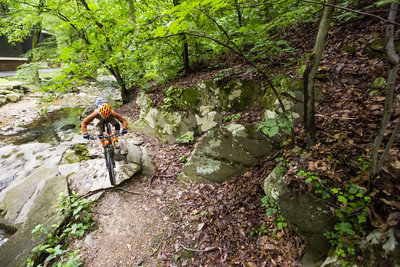 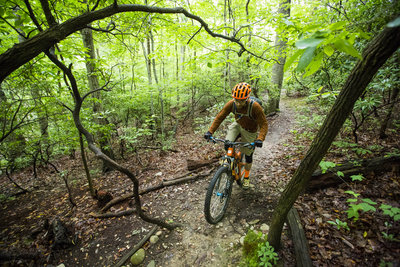 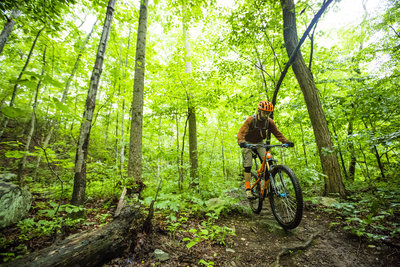 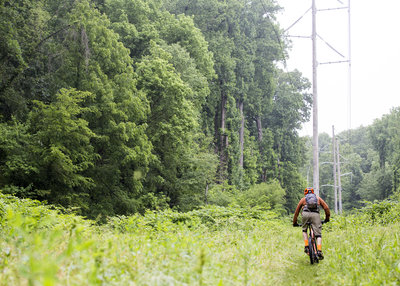