In recent years, Golden Spike has become the de facto starting point for descent trails on the north side of Galbraith. And it's no surprise that it has become so popular as the ample supply of doubles tastefully blended with small sections of tech really shine at fast flowy fun.

The trail begins in a clearing (where you'll find an SST sign, don't worry, you're in the right place) that is most commonly accessed by the Golden Spike Connector and Dragonfly, but it's also reachable from Cabin. Here, riders will find a bench and kiosk that serve as a common gathering point as groups get ready to descend.

After the kiosk, Golden Spike unleashes a succession of doubles intermixed with small rooty sections and flowy turns. In addition to these trail delights, there is a gravel road crossing early on. Towards the end, riders are presented with a steep rock roll-down (or drop for the bold) to the left followed by a large gap. Or an easier descent to the right on the Golden Spike Bypass. Both of these options cross Road 1200 before continuing toward SST.

Most everything on Golden Spike can be rolled, making it a blast for riders of many skill levels. 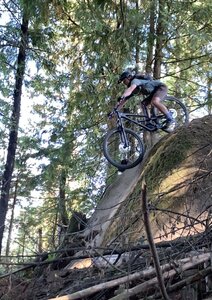 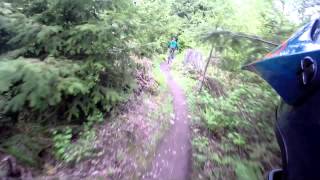 Double Diamond to Double Down