The Ketchum Ranger District has completed the reconstruction of the trail, which was severely damaged during the 2013 Beaver Creek Fire and subsequent storms. The trail is open.

Begin this amazing alpine trail by shuttling a vehicle or catching a ride to the end of Baker Creek Road FS162. Climb up from the trailhead for a couple miles as the trail heads up Lost Shirt Gulch to the ridge. The higher you get the better the views get.

Once on the ridge the trail climbs and descends many times. There are a lot of uphills heading west to east, but overall you are losing elevation, so you get a lot of fun descending in. Some people have gone so far as to call it a "never ending descent back down towards Ketchum," but that might be a bit overstated.

The trail is well designed and a pleasure to ride on. Continue east on the main ridgeline trail - stay on the main trail, as some intersections are reached and signs have not yet been replaced following the fire.

The Osberg Ridgeline Trail intersects with the Adams Rib Trail near the east end of Osberg and near to Fox Peak. You can continue east on the Adams Rib Trail #142 back into Ketchum/Sun Valley, or take one of the two connector trails north to the East Fork of Baker Creek Road.

"Despite being in the middle of pristine nothingness, the new Osberg trail rides like a loopy little excursion next to town. Uniquely, the trail does not torture you with a climb that lasts for hours before sending you down the other side like most trails in Sun Valley. It follows a ridge system, popping in and out on each side slapping you with show-stopping views which make riding at anything other than a stop and go pace almost impossible. As it rolls along, Kodak moments inhibit progress, but we are not in a hurry. Each stop results in another telling of some tale from the road or reminiscing over our many rides past. Despite the mellow terrain, nearly everyone takes a soil sample resulting in arm or leg jerky, but no one seems to care. It is a perfect day for the perfect ride. Whoops can be heard in the woods, and at each stop high fives are thrown all the way around."

- From an article on the trail by Greg Randolph, Sun Valley Tourism 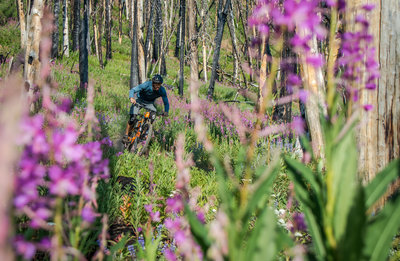 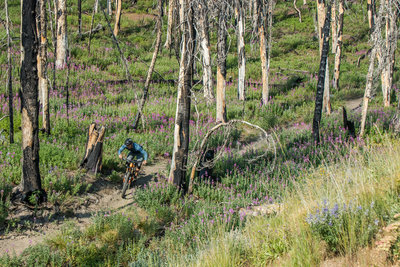 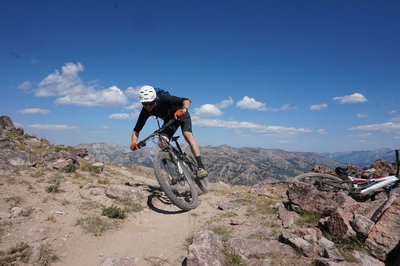 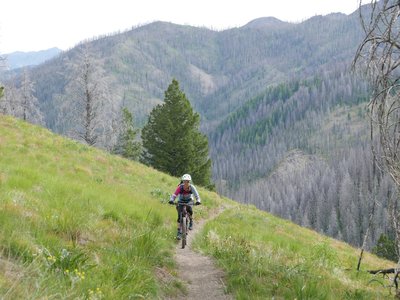 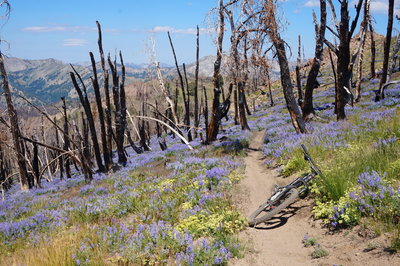 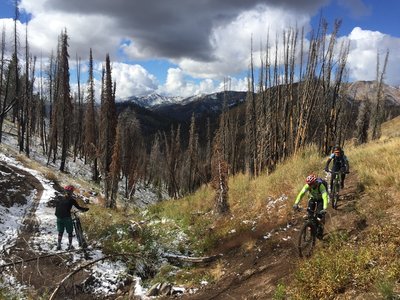