“A mix of old school and new school singletrack, some berms, some views, a bit of everything. ” Ridgeback is one of the newer trails in Kananaskis, built in 2009-2010 and maintained by the Calgary Mountain Bike Alliance. It's a mix of machine-built and hand-built construction, designed to provide an alternative to the perennial wetness of the Tom Snow (South) trail. As a multi-use trail, it has become quite popular with mountain bikers and trail runners in a short time. It's a new trail, so tweaks and changes are always happening.

Signage is good, with a map at every intersection. There are a few opportunities for airtime if you watch for them. There are great views of the valley from the top of the ridge, although you might miss them as you cruise along the 3km descent to the Ranger Creek bridge.

Ridgeback has a bit of everything, providing a significant challenge for beginners and a fun rip for more advanced riders. The lack of roots and rocks (at least on R3 and R4) means you can concentrate on feeling the flow instead of worrying about losing your front wheel mid-turn. Insloped turns [berms] have been included to make things more enjoyable for climbers and descenders, not to mention reducing erosion. The hand-built southern sections of the trail gradually become more rooty and techy over time, subject to periodic maintenance. There are four wooden boardwalks spread throughout the trail, which overcome otherwise wet and muddy sections.

Ridgeback and Tom Snow (South) come together at three points, dividing both trails into four sections, all of which are good in either direction. You can mix and match sections of the two trails to extend or shorten your ride. The four sections of Ridgeback are numbered from south to north for easy reference and are commonly known as 'R1' to 'R4'.

If doing an out-and-back from Station Flats it's worth taking the final section of Tom Snow up to the Packer's Mountain Road and turning left up that to the foot of Moosepackers Trail, where you can begin your return via Ridgeback. You can also make various loops by incorporating Bobcat or Snakes & Ladders. 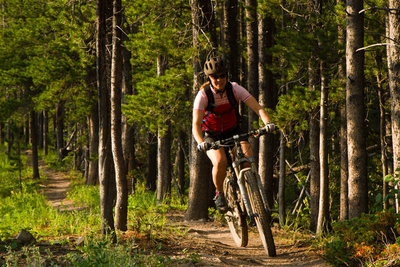 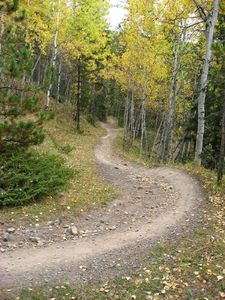